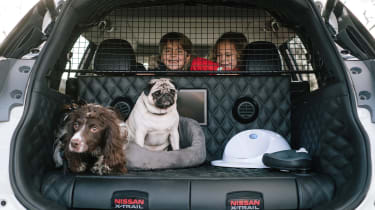 A new study has shown dog-owning SUV drivers could be putting their pets’ health at risk by forcing them to jump out of their cars’ high boots.

The study’s authors found that “allowing dogs to repeatedly jump clear from vehicles with high boot compartments may be inadvisable."

The dogs in question were made to jump from platforms set at 0.55, 0.65 and 0.75 metres, simulating common car boot heights. The study, published in Vet Record, found that the stresses placed on the dogs’ front legs progressively increased as the platform’s height was increased.

There was roughly a 25 per cent increase in peak ground force pressure between the lowest and highest platforms. This led Dr Alison Wills, one of the study’s authors and a senior lecturer in animal science at Hartpury University, to warn that “allowing dogs to jump from bigger cars with a higher boot sill may result in augmented levels of loading on anatomical structures."

Dr Wills also cautioned that “dogs jumping from a vehicle may have undergone an extended period of rest meaning they lack the warm up that is essential for injury prevention."

Dog owners concerned about their pets’ jumping from their SUVs may wish to give Nissan a call: following the positive reception of its 4Dogs concept, the company introduced an optional Paw Pack for its X-Trail SUV. This includes a dog guard, a bed, and crucially a ramp for dogs to walk up and down when accessing the car’s boot.

Need to keep your car clean for your dog? These are the best car boot liners money can buy…