Hold onto your helmets, folks. Daniel Ricciardo - among the finest F1 drivers of his generation - has weighed up the odds and wagered the best years of his career in a bid to win motorsport’s ultimate jackpot.

Last Friday, the 29-year-old announced he’d signed a two-year deal with with the Renault works team, ending what will be a five-year stay at Red Bull come the end of 2018.

The gamble has dropped a bombshell on the sport. Ricciardo has made no secret of his desire to put himself in the best machinery available for a shot at a world championship title, and given Renault’s midfield status, few had this outcome on the cards. 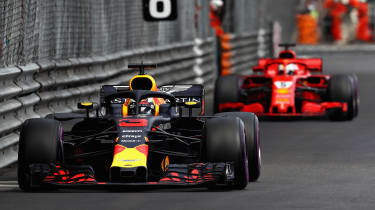 The Australian had sounded out opportunities at Mercedes and Ferrari - F1’s current powerhouses - but to no avail, and was universally expected to stick with Red Bull for the foreseeable future.

It’s a typically gutsy move. Ricciardo - having amassed seven wins and 29 podium finishes so far with Red Bull - has built a reputation as one of the fiercest drivers on the grid, combining devastating commitment on the brakes with the kind of composure that saw him win this year’s Monaco Grand Prix despite suffering a hybrid failure worth up to 225bhp.

Only this time, Ricciardo has had months rather than milliseconds to line up his move, and the Aussie has agonised over his options in full knowledge that his decision could determine whether or not he ever becomes world champion.

Prior to the British Grand Prix at Silverstone back in July, Ricciardo spent half an hour in a boardroom secreted at the heart of Red Bull’s Milton Keynes factory discussing his future with half a dozen journalists.

By that point Red Bull had confirmed their intention to ditch long-term engine suppliers Renault in favour of Honda, whose abject three-year stint as McLaren’s engine provider yielded much embarrassment thanks to its product’s lack of both power and reliability.

“Once Red Bull did the Honda deal, it was kind of like ‘Right, this is what we’ve got,’” said Ricciardo, cautiously. “I see the reasons for the team doing it. They’ve done their homework and they’ve understood a little bit from Toro Rosso. That gives me confidence. 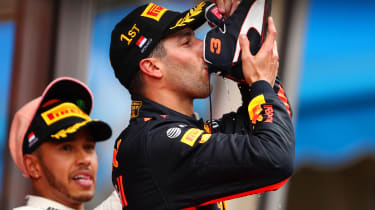 “I guess the more I’m around the team, the more I hear their pitch. I’m leaning towards staying and hoping that the Honda stuff works out. I’m slowly being convinced.”

Too slowly, it would seem.

Other factors have forced Ricciardo’s hand. Teammate Max Verstappen signed a lucrative contract with Red Bull last year, making him one of the best paid drivers on the grid at just 20 years of age. Some believe the bloated paycheque has also bought him an elevated status, and although there’s been little evidence of favouritism, the suspicion was long-term plans were being formed around the Dutchman.

And while Verstappen has time on his side, Ricciardo does not. True, at 29 he’s yet to reach the peak of his powers. But neither is he in a position to let opportunities pass him by. The overwhelming likelihood is that with Honda power, Red Bull will be unable to break their rivals’ stranglehold on the sport for at least the next two years.

It was time to raise the stakes.

In Renault, Ricciardo has at least made a historically safe bet. Twelve constructors’ titles and eleven drivers’ championships have been won with Renault power: only Ferrari have won more.

The French outfit is making quiet progress, too. Having returned to F1 as a full works team in 2016, Renault aimed to compete for championships within five years, and the investment needed to realise that ambition continues behind the scenes. 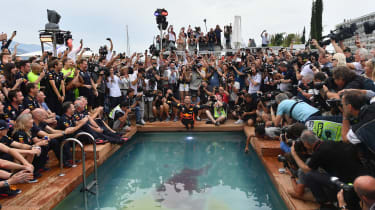 And in 2021, a major regulation change is set to shake up the sport’s established order, from which a new dominant force could emerge. By then, Renault will be ready. So will Ricciardo.

There are no guarantees though. It will take an incredible effort to outperform the operations Ferrari and Mercedes have running at Maranello and Brackley, and even then Ricciardo will face competition from within.

New teammate Nico Hulkenberg is highly regarded, and although he’s yet to record a podium finish in F1, the German driver has been waiting patiently for a chance to prove himself in a race-winning car. He’ll have no intention of playing second fiddle.

And Ricciardo’s worst nightmare remains on the table, in that Red Bull could flourish as Renault flounder.

Back in the boardroom, Ricciardo observed: “If the [Honda] engine was able to outperform the Renault, then it puts us in a pretty good mix. I guess that was a fear as well, if I did move on and then Red Bull win… That would suck.”

The die are cast and Ricciardo’s all in. There’s no going back from here.

Has Daniel Ricciardo made the right call by moving from Red Bull to Renault? Join the debate below…