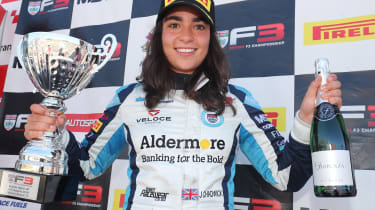 Starting from fourth on the grid, the 20-year-old Douglas Motorsport driver leapt to second on the opening lap, slotting in behind Double R Racing’s Pavan Ravishankar.

• Opinion: Ricciardo’s shock Renault F1 deal is a roll of the dice

However, the Singaporean was handed a 10-second penalty for jumping the lights at the start, leaving Chadwick free to record her first single-seater victory following podiums at Rockingham in 2017 and at Oulton Park earlier this year. 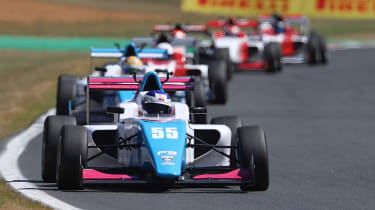 The win - claimed around the 2.4-mile GP Circuit at Brands Hatch - came in race two of the event, with the finishers from race one assembling on the grid in reverse order.

“It’s a great feeling,” Chadwick told Auto Express. “I think more than anything it’s a weight off my shoulders. That win has been tantalisingly close at times, and to finally get that win - albeit in race two - just shows what we’re capable of. Hopefully we can push for more.”

Chadwick admitted she “wasn’t so happy” with the rest of her weekend, following her victory with an 11th place finish in race three. She now lies 8th in the standings with six races remaining.

“We’ve got six weeks off so I’ll enjoy the moment,” Chadwick added. “We still need to work hard and not get complacent. There’s a lot to analyse, a lot to review.

“Then we’ll see what happens in the winter. One of the nice things about motorsport at the moment is there’s lots of avenues to go down. I’m looking forward to exploring those a bit more, whether it be back in sports cars, or Formula E potentially. We’ll see.”

Check out the top ten best track day cars of 2018…