Ford and Vodafone are testing a system to alert drivers of upcoming incidents, and instruct them to clear path for emergency services 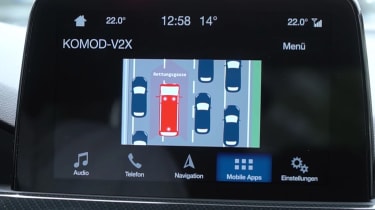 Ambulances, police cars and fire engines could soon have a smoother path through traffic when heading to emergencies, after Ford and Vodafone confirmed they are testing a system the will alert drivers to incidents.

Dubbed eCall Plus, the system builds on the eCall system, which automatically alerts emergency services if a car is involved in a serious accident.

eCall Plus will go several steps further than eCall, however. Its architects envisage it will use car infotainment systems to warn drivers of an incident, such as a crash, up to 500 metres ahead. It will also inform them that emergency services are approaching, and instruct them to move to a specific side of the road.

This would create an “emergency corridor” for rescue vehicles to travel down, saving paramedics, police officers and fire-fighters from having to weave between vehicles that pull over on random sides of the road.

Experts estimate the victims of accidents have a 40 per cent better chance of survival if they are reached by emergency service personnel just four minutes more quickly. 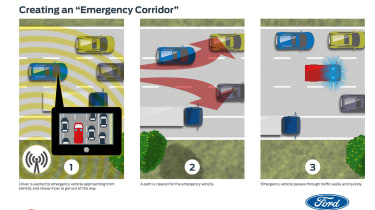 Countries that legislate for emergency corridors typically mandate that on dual carriageways, corridors are created in the middle of the two lanes. One study in Germany, however, found almost 50 per cent of drivers don’t know how to create an emergency corridor, while another found victims of accidents have a 40 per cent better chance of survival if they are reached by emergency service personnel just four minutes more quickly.

Gunnar Herrmann, Ford’s German CEO, said the company has a long history of “testing vehicle to traffic infrastructure and vehicle to vehicle communications that can contribute to greater road safety and efficiency”. Hannes Ametsreiter, CEO of Vodafone Germany said the “digital revolution” has the potential to “help save lives on our roads”.

While eCall Plus may be some years off, all new cars sold in Europe since April 2018 must be fitted with eCall. As well as alerting emergency services to an incident, eCall lets authorities know the vehicle’s precise location, which kind of fuel it runs on, and in which direction it was travelling when it crashed. eCall is estimated to reduce emergency response times by up to 50 per cent in the countryside, and 60 per cent in built-up areas. The system also features an SOS button, allowing drivers to summon assistance manually.

Is eCall Plus a good idea? Let us know in the comments…