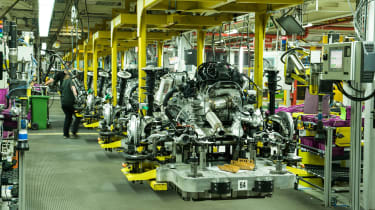 The organisation – which represents the 15 largest Europe-based car, van, truck and bus manufacturers – says automobile factories in both the UK and the EU27 rely on “just-in-time” or “just-in-sequence” delivery and production, where parts are constantly in transit in trucks and are delivered exactly when they are needed without delays or obstacles.

Around 1,100 EU trucks cross the English Channel every day to deliver automotive parts to UK factories. The ACEA says even a short hold-up at customs would cause massive logistical problems – disrupting production processes and generating significant costs.

Erik Jonnaert, secretary general of the ACEA, said: “Our members are already making contingency plans and are looking for warehouse spaces to stockpile parts. However, the space required to stockpile for more than a short time would be absolutely huge – and expensive.”

Another factor of a no-deal Brexit that concerns the ACEA is the 10 per cent World Trade Organisation tariff that would be applied to all cars traded between the UK and the EU.

Jonnaert continued: “We cannot forget that profit margins in our industry are significantly lower than 10 per cent. At the end of the day, these extra costs will either be passed on to the consumer or will have to be absorbed by the manufacturers.

“The clock is ticking, but it is not yet too late. That is why we are urging the negotiating teams on both sides to redouble their efforts to successfully conclude a withdrawal deal.”

“Any change in the level of integration of the value chain will have an adverse effect on the competitiveness of individual companies and the sector as a whole.”

Britain’s automotive sector is preparing for a no-deal Brexit by launching a new Readiness Programme, and setting up a free Brexit telephone helpline for businesses involved in the industry.

The Society of Motor Manufacturers and Traders (SMMT) is primarily targeting small and medium-sized enterprises (SMEs) with the initiative, saying 69 per cent of companies involved in UK automotive supply chain employ fewer than 10 people. The SMMT considers such firms may not have the resources to adequately prepare for a hard Brexit, and its assistance programme will see big outfits like Deloitte and PwC offer advice and consultancy services.

Other difficulties potentially being faced by the Industry include calculating the value of goods for the purposes of trade tariffs, proving the country of origin of items made in the UK, and planning linked to the stockpiling parts; this latter issue may be made necessary by border bottlenecks and other import/export difficulties.

The frictionless trade European trade conferred upon the UK by its EU membership means such considerations have hitherto been unnecessary, but Brexit – and particularly a hard, no-deal Brexit – could force firms to rethink their trade arrangements.

• UK driving licences could be invalid in EU countries

The SMMT highlighted the Midlands as an area particularly at risk from the impacts of Brexit. Some 39 per cent of automotive jobs are in the area, while one in 11 UK-made cars is built in the city of Derby alone.

Commenting on the programme, Mike Hawes, chief executive of the SMMT, said local supply chains form the “backbone” of manufacturing, and the UK car industry had “thrived” thanks to the frictionless trade made possible by EU membership.

Hawes added a no-deal Brexit could have “devastating” consequences for the industry, and that the SMMT’s new initiative “seeks to mitigate the threat of ‘no-deal’ by helping businesses navigate the complex trade realities of a post-Brexit landscape.”

Will a hard Brexit be as devastating for the car industry in the UK as the SMMT believes? Let us know your thoughts in the comments...