The uncertainty over Brexit is causing concern for car manufacturers, says Steve Fowler 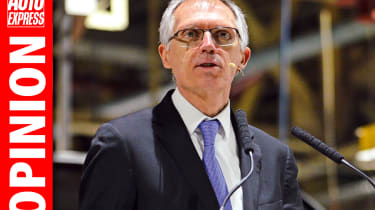 There has been a distinct change of tone from car industry bosses in their messages to our Government and EU negotiators over Brexit.

PSA chief Carlos Tavares (above), responsible for Vauxhall and its Ellesmere Port and Luton plants, plus Peugeot, Citroen, DS and Opel, was blunt when I asked him what his thoughts were on the current situation. “My message to Mrs May and [EU chief negotiator] Monsieur Barnier is that no deal is unacceptable,” he said. “In the interests of British and EU citizens we must have a deal.”

No deal would also mean prices would rise and the number of available models reduce, says Tavares. JLR boss Dr Ralf Speth has been similarlystrident in recent weeks and he told me in Paris: “It’s becoming more and more difficult to justify further investment in the UK due to uncertainty. “Free and fair trade was the best solution 200 years ago – that’s the same now.”

Nissan warned that there would be “serious implications for British industry” if there is no trade deal, while Toyota and MINI have said they would halt production at UK plants to deal with the logistical issues that will ensue from a hard Brexit.

No news is bad news, and we’re currently heading towards a no-deal Brexit that will leave the UK’s car makers – and the hundreds of thousands of people who rely on them for their livelihoods – staring down the barrel of increased costs and job losses. The industry position has been clear throughout: free trade is essential to ensure parts reach factories, that cars reach customers and that prices don’t rise.

The clock is ticking and the industry must plan for our world post-29 March 2019. So instead of dancing across the stage at her party conference, the PM, and Monsieur Barnier, must end the uncertainty now.