The AA, RAC and Green Flag want to see enhanced road safety laws in the wake of three roadside technician deaths in 12 months 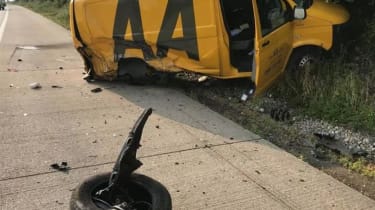 The UK’s three largest breakdown companies have put aside their rivalry to call for new road safety rules in the wake of three roadside technicians being killed in the space of 12 months.

The AA, RAC and Green Flag co-wrote a letter to road safety minister Jesse Norman MP asking for a new 'slow down, move over' rule to be implemented.

This would require drivers to reduce their speed and change their road position whenever they pass a broken-down car or a recovery vehicle with its flashing amber beacons turned on, reducing the risk of anyone standing at the roadside being injured.

In addition, the groups want to see the Department for Transport sponsor a THINK! road safety campaign highlighting the dangers faced by both patrols and members of the public at roadside breakdowns.

The most recent roadside technician death was that of 33-year-old David Stokes, who worked for the RAC and was killed on June 16 when he was hit by a car while repairing a vehicle on the A617 at Rainworth, Nottinghamshire.

Two other roadside technicians also lost their lives in the previous 12 months and, additionally, the organisations report “numerous roadside incidents” having occurred over the course of the last year.

• What to do after a car crash

This is not the first time a letter such as this has been sent to Norman, with the AA having written to him on November 1, 2017 calling for changes to the Highway Code. However, the firm’s suggestions were not implemented.

Edmund King, president of the AA, said: “Between our organisations. we have seen too many near misses and too many fatalities caused by this problem. That needs to change quickly. ‘Slow down, move over’ is not a difficult request, but this simple act of kindness will make a world of difference to vulnerable drivers, patrols and road workers alike.”

James Knight, chief operations officer at the RAC, commented: “In light of the recent fatalities, we now urgently need the government to work with us to raise awareness of the issue among drivers and to promote a ‘slow down, move over’ message. This must be backed by a high-profile publicity campaign and a change to the Highway Code.

Would you be happy to see a 'slow down, move over' rule implemented? Let us know your thoughts in the comments...