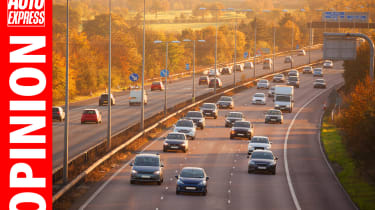 We, the car users, are facing a new and growing problem caused by them, the comedians paid to run the transport show.

They repeatedly fail to listen to us; they blatantly refuse to deliver the goods we’ve bought and paid for (newer, safer, better-repaired roads) and they wrongly assume they know best. It’s not just local and national politicians who’re to blame. Countless transport-related agencies funded in full or part by the state don’t ask us what we think, never mind consider and act upon our invaluable advice.

The proposed closure of an entire motorway, the M26, is a perfect example. It’s a good, safe, strategically important M-road linked to the M20, the Channel ports and the M25 that circles London. Yet transport secretary Chris Grayling, Department for Transport officials and a handful of other ‘professionals’ have decided it could become a lorry park if Brexit is chaotic. Were car and van drivers or the trucking industry consulted on this? No.

Were plane passengers asked if nearby Manston Airport should be shut down and made another lorry-parking compound for mainly foreign-registered trucks? Negative.

Did anyone seek the views of would-be buyers of pure-electric and petrol-electric vehicles before the Government unexpectedly axed or reduced its incentive grants to buy them? Nope. And, on an even grander, more important scale, before the UK Government decided that petrol and diesel engines are bad/must soon be outlawed, and that driverless tech is good/must be subsidised by the state, how many ordinary car, taxi, van and truck drivers did it converse with and get approval from? None. Private motorists, company car drivers and countless millions of full-time professional drivers who, er, drive for a living weren’t even thought about, never mind consulted.

The transport politicians, civil servants and other ‘experts’ in the field could and should learn from this tried-and-tested process. Deep down, we all know the people best-qualified to talk about the problems – and the solutions –  are the folk who drive on our roads daily. So, to those in charge of transport I say: survey these real-world road users who are better-suited than most to explain how roads can become more efficient, safer and enjoyable to use.

We’re 46million strong and, in effect, we are free, expert, willing and able consultants. Talk to us. And, for once, listen to and act upon what we say.