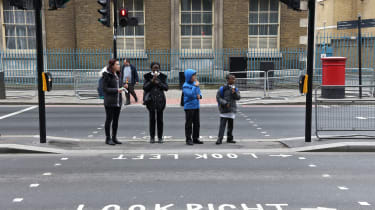 Four out of five drivers and pedestrians in the UK are unable to identify a pelican crossing, despite them accounting for a third of all casualties at pedestrian crossings last year.

On average, one pedestrian is killed and 15 seriously injured on the UK’s roads every day, equating to more than 5,500 casualties a year.

• One in seven drivers would jump a level crossing

There’s also a lot of misunderstanding over what a green flashing figure at a pelican crossing means. Although this symbol tells pedestrians not to start crossing the road, more than two in five think it means they simply don’t have much time to cross and one in five believe it means they have plenty of time to cross.

Figures from the insurance company also revealed a third of pedestrians have had a near miss when using a crossing, 19 per cent of whom admit they didn’t look properly and one in 10 saying they were distracted by their phone. A further 10 per cent concede they ignored the light signals altogether, but in contrast four out of 10 blame the driver of the car.

Around a quarter of drivers have had a near miss with a pedestrian at a crossing, with 50 per cent of them blaming the pedestrian for not looking before they crossed, a third claiming not to have seen the pedestrian and 13 per cent admitting being distracted by their phone.

Admiral head of motor Sabine Williams commented: “What’s worrying about these findings is how little both drivers and pedestrians understand about the designated crossings and what the rules are for safely using them.”

She added: “More needs to be done to make sure all road users know what their responsibilities are when it comes to crossing so we can see a reduction in the number of accidents taking place.”

Zebra crossings give pedestrians looking to cross the road priority over cars. They can be identified by the black and white stripes on the tarmac and sometimes feature yellow lights at either side called Belisha beacons.

Pelican crossings employ a traffic light system for both drivers and pedestrians. People crossing the road on foot are required to push a button, wait for vehicles to be stopped by the red traffic light, then cross once their green signal appears.

A puffin crossing works on the same principle as a pelican crossing, the only difference being it uses sensors to detect whether any pedestrians are waiting to cross the road or not.

Toucan crossings and pegasus crossings are the same as puffin crossings, except cyclists and equestrians respectively are allowed to use them to cross the road alongside pedestrians.

Do you know the difference between the different types of crossings in the UK? Let us know below...