After winning a fifth Formula One world title, Mike Rutherford thinks Lewis Hamilton is not getting the praise he deserves 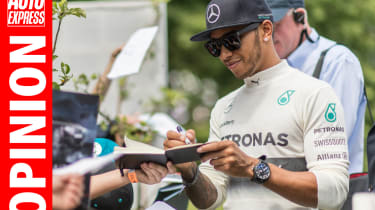 Lewis Hamilton ain’t my favourite person. I don’t even know that I like the bloke. But I do know he’s paid too much. And that his sometimes sulky manner puts him in ‘bad loser’ territory. C’mon chap, losing is rare for you, so please be a bit more gracious in defeat.

But that’s where my criticisms of the great man end. The 33-year-old from Stevenage has just claimed his fifth Formula One World Championship, and in doing so can consider himself responsible for the greatest sporting achievement by a Brit in the past 50 years.

• All motorsport to be made impossible by new EU insurance rules

True, the likes of Steve Redgrave, Lennox Lewis, Kelly Holmes, Jonathan Rea and Bradley Wiggins have taken to the global sporting stage and become one-off or serial world champions. They should be applauded, revered, rewarded and never forgotten.

But what Hamilton did in Mexico last month was on another level. Winning just one F1 race is something most talented, respected drivers just can’t do. Martin Brundle didn’t achieve a single victory in his 158 starts. Yet Lewis has to date won 71 races – more than Lauda, Fangio, Fittipaldi and Surtees put together.

Another true-great is Sir Stirling Moss, who won 16 F1 races but never, despite his obvious talents, secured a world title. But Lewis has already picked up five. To put this feat into context, collectively James Hunt, Nigel Mansell, Damon Hill and Jenson Button couldn’t and didn’t win as many.

With those world championships already under his belt, Hamilton is joint second with Fangio in the league table of most successful drivers in F1 history; only Schumacher is ahead, with seven wins. But Lewis is still young, hungry and talented enough to equal or beat Michael’s record, thereby assuming the title of Greatest F1 Driver Ever. He could, should and probably will.

So what more does he have to do to gain the recognition he deserves from the broadcast media, Buckingham Palace, the British public and others? BBC Sport salivates when Andy Murray wins a game of tennis, or Phil Taylor throws a dart at a board, or ‘plucky’ Gareth Southgate tries and fails to win the World Cup.

But Hamilton’s serial F1 victories barely get a mention on the Beeb. And even Channel 4, sole provider of F1 coverage on terrestrial telly, disgracefully failed to show Lewis winning his fifth world title on the Sunday he won it, instead hanging on until the early hours of Monday to air the history-making moment.

The Queen should immediately deliver Lew’s overdue knighthood. His local mayor should award him the freedom of Stevenage. The PM must find a date in the diary for Lewis Hamilton Day, a Monday, in summer, when we all get a day off to celebrate the greatest British sportsman since 1966. Truth is, that’s what he is.

Do you agree with Mike? Do you think Lewis Hamilton deserves more praise for what he has achieved? Let us know below...