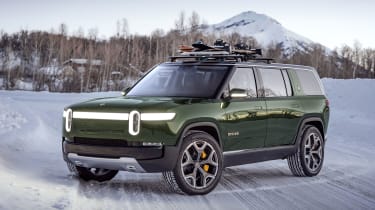 Rivian Automotive LLC has secured a $700 million (roughly £546 million) round of investment in its firm.

Fundraising in the electric car manufacturer, which impressed with its R1T pick-up and R1S seven-seat SUV at the Los Angeles Motor Show towards the end of 2018, is led by Amazon, and should enable production for its two vehicles to begin towards the end of 2020 from its new factory based in Normal, Illinois.

Despite the significant injection of cash, Rivian stated that it will remain an independent company. Earlier investors, including Japan’s Sumitomo Corp and Saudi industrial group Abdul Latif Jameel Ltd, are also on board with the investment, although exact quantities have not been disclosed.

Speaking at the announcement of the news, Rivian Founder and CEO RJ Scaringe said, “this investment is an important milestone for Rivian and the shift to sustainable mobility. Delivering on this vision requires the right partners, and we are excited to have Amazon with us on our journey to create products, technology and experiences that reset expectations of what is possible.”

Rivian attracted plenty of attention at their public unveiling, showcasing a pair of electric vehicles showcasing fascinating tech and intricate attention to detail. Both the R1T and R1S feature a choice of three battery sizes offering a capacity between 105kWh and 180kWh, enabling ranges from 230 to 400 miles. Despite the hefty 2.6-tonne weight, the pickup’s four motor setup is claimed to deliver a 0-60mph time of around three second.

The R1S, meanwhile, features much of the same tech under the skin, but offers a more conventional SUV body with seating for seven. The R1s is available to pre-order in the US now, with prices starting from around $65,000 (£51,000) after the US government’s EV tax rebate.

Click here for our interview with Rivian founder and CEO Robert 'RJ' Scaringe...