Suzuki Vitara: Plan your next adventure

If you're looking for a stylish, safe and practical SUV that's good to drive, the Suzuki Vitara demands attention 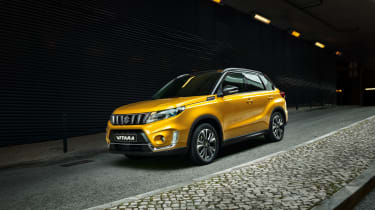 Drive an SUV, and you get a sense of adventure whenever you climb behind the wheel. Many of these cars feature a raised ride height and four-wheel-drive transmission, as well as generous interior space, so you feel as if you could load up and head for the hills on every journey – even if you’re only doing the school run. And nowhere is this more the case than in the Suzuki Vitara.

This car scores with its rugged exterior design, and the strong yet compact SUV shape is guaranteed to turn heads. It’s marked out by features such as a chrome grille and LED headlights, as well as a range of attractive alloy wheel designs. Buyers also get the choice of some exciting single and two-tone paint finishes to further distinguish their model, and ensure it looks great whether it’s sitting in town traffic or getting muddy on a farm track.

The sense of fun continues inside the Vitara, with its clear and simple layout ensuring the focus is very much on driving. The three-spoke leather-covered steering wheel only enhances this, and its multifunction controls put you in fingertip command of a wealth of useful features, from the cruise control to the sound system with DAB radio fitted in SZ-T and SZ5 models. 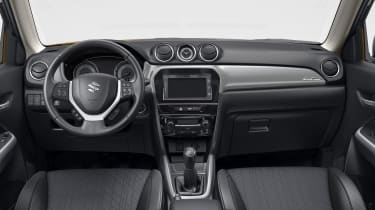 And if you’re into technology, the Bluetooth hands-free lets you connect your phone to make calls legally on the go. SZ-T and SZ5 models boost the gadget count with a seven-inch Smartphone link touchscreen display in the centre of the dashboard. Once you connect your smartphone, you can access your apps - including Google Maps.

Tech isn’t just there for fun, of course; it has also made modern cars safer than ever. And the Suzuki Vitara offers a whole host of cutting-edge safety kit. Leading the way is a lane departure warning system on SZ-T ALLGRIP and SZ5 models. This monitors the car’s path at speeds of 37mph and above. If it senses that you’re veering out of your lane without indicating, this ingenious system flashes a warning in the instrument display and vibrates the steering wheel, so that you can correct your line.

Top-spec Suzuki Vitara SZ-T ALLGRIP and SZ5 models also benefit from a blind spot monitor. Radar sensors in each side of the car detect vehicles that might be approaching in the blind spot when you’re driving on a multi-lane road, and a warning icon is illuminated in the relevant door mirror to help prevent an impact.

Adding to the car’s safety credentials are seven airbags across the range, while SZ-T ALLGRIP and SZ5 models have adaptive cruise control and Suzuki’s Dual Sensor Brake Support autonomous emergency braking. And family buyers will also be drawn by the generous amount of space in the front and rear considering the Vitara’s compact footprint. This airy feel is enhanced by the panoramic sunroof on the SZ5, and also by a boot that expands from 375 litres with the rear seats in place to a maximum of 710 litres with the seatback folded. 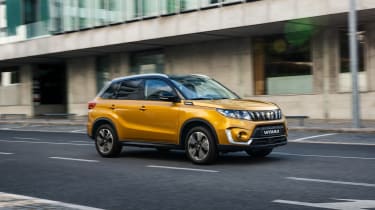 The driver’s seat is the place to be, though; from here, you get to experience the true breadth of this car’s abilities. The ALLGRIP 4-wheel Drive system allows the Vitara to take everything from icy early morning urban streets to rough rural tracks in its stride. The Drive Mode Select dial on the dashboard enables owners to choose between Auto, Sport, Snow and Lock settings, which adjust the engine and throttle response, and ESP input, to suit different situations. Auto maximises efficiency, Sport gives the most thrilling drive on the road, while Snow and Lock keep the Vitara moving when the going gets really tough – ensuring this great-value SUV has more off-road talent than some models carrying a much higher price tag.

The Vitara is just as capable on the road, of course, with its 1.0-litre or 1.4-litre Boosterjet engines providing punchy turbocharged performance and the suspension serving up an impressive ride and handling balance for an SUV. But when the car can truly deliver on the promise of its rugged looks, it’s no surprise that owners will want to take the long way home, and embark on their own off-road adventure.