Government considering penalty points for not wearing a seatbelt

Failure to wear a seatbelt could result in penalty points as well as a fine, under new road safety plans being considered by the Government 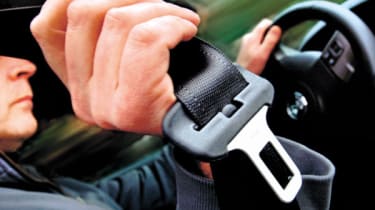 The Government is considering issuing penalty points to drivers who fail to wear a seatbelt as part of a new road safety action plan aimed at reducing the number of deaths on the UK’s roads.

Despite the fact that, in 2017, 27 per cent of car deaths involved people who were not wearing a seatbelt, the punishment for committing the offence in England, Scotland and Wales is just a fine of £100, which can be increased to a maximum of £500 if the case goes to court.

• The evolution of car safety

Now, the Department for Transport (DfT) is considering introducing penalty points for such an offence, as part of a package of 74 potential actions to improve road safety in the UK. This follows a report from the Parliamentary Advisory Council for Transport Safety (PACTS) calling for Great Britain to adopt the same rules as Northern Ireland, where drivers who don’t wear a seatbelt are handed three penalty points.

Another key area of focus in the DfT’s plan is rural roads, for which an advisory panel will be set up to look at how rural road safety can be boosted via the improvement of roads and traffic signs, as well as by tackling issues around speed limits and enforcement.

The DfT has broken down some of its other plans by which age groups they will affect. For children, a £225,000 grant has been given to Good Egg Safety to deliver a safety training programme for retailers to help parents correctly fit baby and child seats.

Research will also be commissioned into whether mobile phone use among young pedestrians leads to an increased risk of road collisions, as well as how children aged seven to 18 with special educational needs and cognitive disabilities can be taught to understand the dangers near roads.

For young adults, the Driver and Vehicle Standards Agency is developing a behavioural change campaign designed to encourage learner drivers to broaden their experience by using more rural roads and driving at night before taking their test.

• One in four people killed on road not wearing a seatbelt

There will also be research into the benefits of Graduated Driving Licences, while THINK! will continue campaigning against drink-driving, mobile phone use while driving, speedin and passenger distraction.

With adults in mind, the DfT will be looking at the feasibility of alcolocks, while a greater focus on roads policing will be spearheaded by a two-year project with the Home Office and National Police Chiefs’ Council to identify best practice and gaps in services to see how policing can be improved.

Finally, for older drivers, RoadSafe has been given £50,000 to deliver a digital platform to share best practice to reduce road safety risks for elderly road users.

Transport Secretary Chris Grayling said: “Today’s action plan is a key milestone in our road safety work and sets out the important steps we are taking to reduce the number of people killed or seriously injured on our roads.”

David Davies, executive director of PACTS, added that it was “unusual to find a road safety measure with so much benefit and no downsides”.

Do you think you should get penalty points for not wearing a seatbelt? Let us know below...