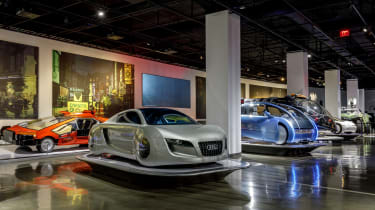 Iconic science fiction and fantasy movie cars are featuring in a brand new exhibition at the Petersen Automotive Museum in Los Angeles with over 40 vehicles from cult classic films and video games on display.

Some of the key vehicles on display include the 2018 Lexus LC 500 F Sport from Black Panther, the DMC DeLorean time machine from Back to the Future, the 2008 Audi R8 from Iron Man and Bumblebee, the Volkswagen Beetle from the Transformers series as well as several different Batmobiles.

• Concept cars: the greatest concept car designs of all time

It’s not just modified production cars that appear in the exhibition as concept cars have also taken many a starring role over the years. The concepts from Peugeot, Audi and Lexus that featured respectively in dystopian future films Blade Runner 2049, Ghost in the Shell, and I, Robot are also in the exhibition.

Alongside the many sci-fi movie cars, there will be hundreds of props, costumes and artwork on display too as well as a virtual reality experience. The VR experience allows guests to see the Warthog from “Halo” and the DeLorean from “Back to the Future” time machine in a new ‘immersive way’.

The Hollywood Dream Machines: Vehicles Of Science Fiction And Fantasy exhibition is the largest museum collection of sci-fi vehicles in the world and will run through until March 2020.

What is your all-time favourite sci-fi movie car? Let us know in the comments below...