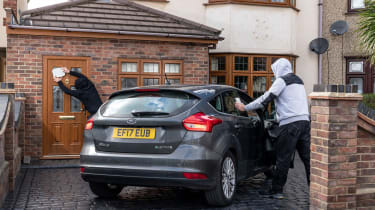 Cars that are vulnerable to keyless theft are set to face higher insurance costs, after the industry experts responsible for setting vehicle “risk ratings” confirmed they would be penalising vehicles that are susceptible to relay attacks.

Thatcham Research, the insurance industry’s automotive research centre, confirmed that if manufacturers failed to include countermeasures to fend off relay attacks on cars with keyless entry systems, the organisation would recommend insurers judge them less favourably when calculating premiums.

While carmakers will be given a grace period to beef up the robustness of keyless systems, from 2021 Thatcham will change its new vehicle security assessment programme (NVSA) to reflect which models are most vulnerable to keyless theft. Insurers don’t have to abide by the guidelines, but the NVSA rating system helps to determine a car’s insurance group rating, meaning many cars are likely to attract higher premiums once the changes come into place.

Owners seeking to future-proof any prospective new-car purchase against potential insurance price hikes post 2021, meanwhile, can head to Thatcham’s security page to check if a car has a Superior, Good, Basic, Poor, or Unacceptable NVSA rating – though the grading system only applies to models introduced since the start of 2019.

The UK is currently experiencing an epidemic of car theft, with insurance payouts for stolen cars at their highest level since 2012, a study by German engineers finding almost every keyless system can be hacked, and police recording under half of all stolen cars as recovered. Carmakers have recently started to roll out fixes to the keyless conundrum, however, with Ford introducing a new keyless key with a motion sensor that puts the fob to sleep when it is not moving.

Have you ever been a victim of keyless car theft? Let us know your experiences below...