Grampian Transport Museum: exploring the hidden past of the Scottish electric car 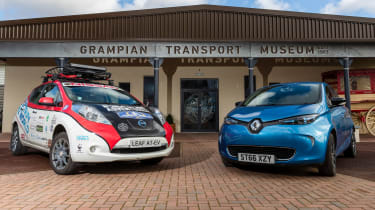 There is a common perception that electric cars are a product of the 21st century – a bold new take on personal transport set to replace the internal-combustion establishment. EVs have been thrust into the public’s consciousness over the past decade or so thanks to the disruptive success of Tesla and an ever-increasing public concern for the environment. But the truth is that electric cars have been around for far longer.

To find out more, Auto Express headed to the Grampian Transport Museum (GTM). This attraction lies in the village of Alford, about 45 minutes’ drive from Aberdeen. Having opened in 1983, it now boasts an evolving range of exhibits that charts the history of transport, both on an international and local level. Remarkably, the latter is central to the birth of EVs.

Curator Mike Ward is on hand to show us around the museum’s latest exhibition, called It’s Electric. It tells the story of the electric car with a focus on Robert Davidson, a chemist, engineer and inventor born in Aberdeen in 1804. Something of an unsung local hero, Davidson is credited with creating the world’s first electric vehicle. 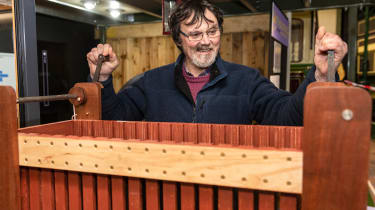 Exactly what form that EV took is still not entirely clear. “We’re not sure if it had four wheels or three, and we’re not sure whether there was any steering,” says Mike.

What we do know is that at an exhibition in Aberdeen in 1839, it was Davidson who first showed a working EV to the public. This was no mean feat in the mid-1800s; electricity (or electromagnetism as it was called) was such a new and unknown phenomenon that science hadn’t even got as far as quantifying it.

“At that time there were no units of electricity – no volts, amps, watts, joules or ohms. They couldn’t measure it,” Mike points out. “And yet there’s Davidson in north-east Scotland making it move vehicles, carrying people, before we had any of that understanding.” 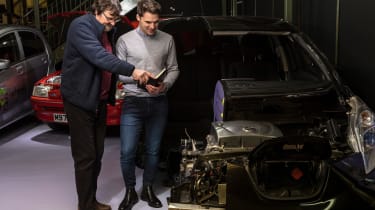 Davidson’s EV ran using a very simple battery, essentially a wooden box that held a liquid-acid electrolyte and a series of zinc plates. This was connected to an electromagnetic motor of Davidson’s own design – a replica of which is on display at the museum alongside a mock-up of his battery.

This local pioneer went on to create the world’s first electric railway locomotive in 1842; it ran for the first time on the Edinburgh to Glasgow line. As with early modern EVs, battery technology held back development of 19th-century electric cars. While pioneering, Davidson’s electric vehicles were somewhat ahead of what contemporary batteries could offer.

“Davidson’s batteries – and everyone else’s at the time – were primary cells; that means you couldn’t recharge the battery like we do now,” Mike explains. “The battery would carry a charge, become exhausted and then it needed serious intervention.”

To ‘recharge’ a primary cell like Davidson’s, the liquid electrolyte – dilute sulphuric acid in this case – would have to be poured out and refilled. Not until 1859 – two decades after Davidson exhibited his first EV – were rechargeable lead-acid batteries invented in France.

Batteries of this kind were used in the development of overground and underground railway locomotives and trams, but also found their way into the first usable electric road vehicles. British firm Elwell and Parker’s efforts in 1884 are cited as the first usable examples – modified horse-drawn carriages built in Wolverhampton.

Edinburgh-based Maldevic was another Scottish contributor during the earliest days of electric cars. The company operated in the UK’s first purpose-built car factory, in the late 1880s. Started by then Royal Astronomer of Scotland William Peck, it made four-wheeled ‘brougham’ carriages with a fifth, central driven wheel underneath. 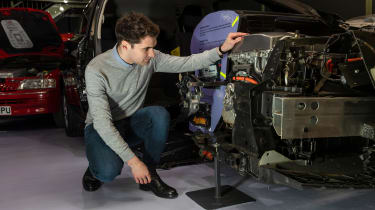 As with today’s EVs, key developments occurred on both sides of the Atlantic. In America, William Morrison introduced the country’s first EV in 1891, while three years later, a Pennsylvanian company named Electrobat produced taxi cabs that could travel at speeds of up to 20mph and, remarkably, could have their batteries swapped at dedicated stations to keep them on the move.

And parallels with today’s EVs keep coming. Just as diesel London cabs are gradually being replaced by PHEVs, “the first adopters of electric cars were taxi firms”, Mike tells us. “In London, Paris, New York and other big cities you had taxi companies buying, and making, electric cars,” he continues.

These were quiet, safe and clean alternatives to traditional horse-drawn transport, and helped cut urban emissions – from horses. As Mike points out, even at the turn of the 20th century, people were still employed as sweepers in towns at the turn of the century to keep crossing points clear of manure. “Electric taxis came about and scythed their way through that – they ruled supreme,” he explains. 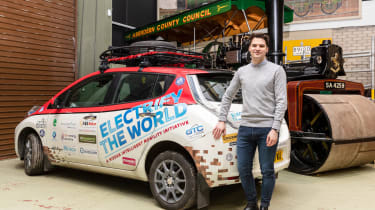 It was around that time, however, that internal combustion motor cars really started to gain traction. The red flag act – whereby motor cars were severely speed-limited and had to be accompanied by a man waving a flag – was repealed in 1896, and public interest grew.

“Motor cars were complex, unreliable, filthy, expensive, but the one thing they had was range, even then,” says Mike. “You couldn’t drive the length of the UK in an electric car at that time, but as soon as the motor car appeared people started driving from Lands End to John O’Groats.”

The real nail in the electric car’s coffin, however, came from Henry Ford and the revolutionary, mass-produced Model T. Production started in America in 1908, and soon made its way to a facility at Trafford Park in Manchester. 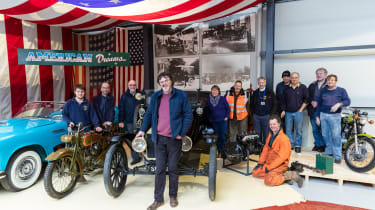 “Before Henry Ford, the motor car was the plaything of the rich; the investment was like buying a small house,” Mike explains. “Model T Fords were everywhere; suddenly, [motor cars] were affordable for middle-class people.”

And so ended the story of the electric car as it was then – promising tech that was quickly outmoded by affordable, mass-produced petrol cars. For years thereafter, the only form of electric road transport that the public would see was the humble milk float. “The milk float ploughed its lonely furrow because it made such good sense,” Mike explains.

It took the fuel crisis of the seventies to jump-start interest in the electric car again, nearly half a century after the last few battery-powered taxis disappeared from the roads. 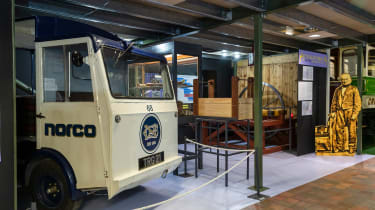 “The technology wasn’t lost, it was just frozen in time,” Mike explains. “The fuel crisis came along in 1971 and there was a panic; there were some frankly pathetic knee-jerk attempts at electric cars.” These were small and largely impractical, with examples like the Sebring-Vanguard CitiCar being short-lived but mildly successful.

The next generation of electric cars arrived when concerns about clean air began to arise. Long before anyone was worried about global warming, clean-air acts were being introduced to try to tackle smog in cities.

“The Ford Ecostar was the next really serious electric car, I would say,” Mike tells us. The Museum has on display one of the few remaining examples, previously used by the Royal Mail and sent to the exhibition by Ford. The Ecostar used a sodium-sulphur battery and a 56kW (74bhp) motor; just over 100 were built between 1992 and 1993. 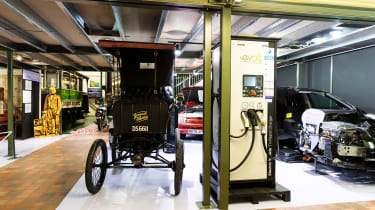 “It was really well received, with a new kind of battery that was many times more powerful than the lead-acid batteries that had been used up until then,” says Mike. Ford tested the Ecostar electric vans with fleet buyers including the Post Office and the police, but overheating issues were its Achilles’ heel. “If it hadn’t had that problem keeping the battery cool, it might have got people thinking more seriously about electric cars a couple of decades ago,” Mike explains.

The electric car got the jolt it needed from the arrival and development of lithium-ion batteries – as found in every mobile phone, laptop and modern EV. “The lithium-ion battery and its development – mostly for cordless drills and that sort of thing – is what got people thinking,” Mike says.

The technology was invented and developed through the seventies and eighties, but it was Japanese giant Sony that first industrialised the manufacture of lithium-ion batteries in 1991 for use in portable electronics. More recently, the likes of Tesla have brought it on in leaps and bounds; Tesla’s early focus on battery tech kick-started the current EV revolution. 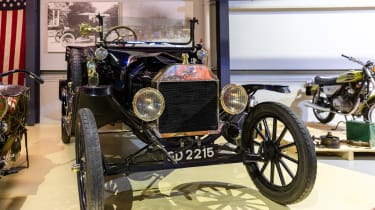 “Lithium-ion has allowed the EV to keep its head above the parapet and there are all sorts of other developments at the same time that have enabled this collision – a perfect storm,” Mike says. “Everything has come together at once.”

The Grampian Transport Museum’s latest exhibition is perfectly timed as the general public wakes up to the idea of running an EV over a conventional car. Those who might need convincing may be interested to find that the EV has a much longer, more illustrious history than is generally known.

“The most exciting thing [about the electric car] is the fact that our society has got no idea what it’s in for in the next few years; the social change associated with this disruption is absolutely enormous,” Mike says. “What’s just around the corner is absolutely fundamental.”