A JCB Fastrac driven by Guy Martin has set a new world speed record for tractors, hitting over 103mph 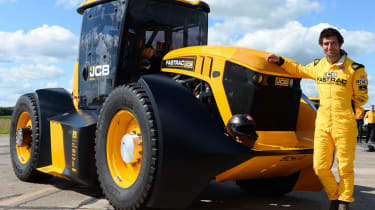 JCB and Guy Martin have broken the current world record for the fastest recorded speed in a tractor. The attempt took place at Elvington Airfield near York where the JCB Fastrac tractor managed to hit 103.6mph, beating the previous record by nearly 20mph.

The record-breaking Fastrac used a modified version of the 7.2-litre, 6-cylinder DieselMax engine found in the regular tractor, which produces 1,000 horsepower and over 2,500Nm of torque. Despite the immense power, the Fastrac still had to go on a strict diet and had aerodynamic help from Williams Advanced Engineering.

The previous tractor speed record was held by BBC’s Top Gear, where The Stig piloted a custom built ‘Track-tor’ to an average speed of 87.27mph back in March 2018.

Driver Guy Martin said: “It had been a great day with the JCB at Elvington, proper job with some right proper engineers. She felt rock steady on the runway, job’s a peach.”

JCB engineers had been working in secret on the project for several months with the aim of making the record-breaking run to coincide with the 28th anniversary of the first ever production Fastrac rolling off the JCB production line.

Despite this world record, it is not the first time that JCB have entered the Guinness Book of Records. Back in 2006, the company set the land speed record for a diesel-engined vehicle with an average speed of 350.092mph.

The full story of the Fastrac’s world record attempt will be shown in a Channel 4 documentary later this year.