The Pagani Huayra Roadster BC is a convertible version of the limited edition 791bhp 6.0-litre V12 Huayra BC 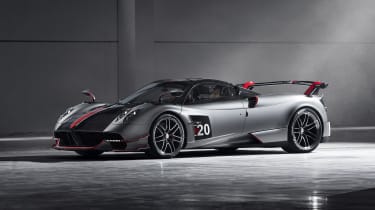 This is the new, limited-edition Pagani Huayra Roadster BC. It’s a lighter, more powerful version of the standard Huayra Roadster and will cost from €3.7 million (around £3.3 million).

It’s powered by an all-new twin-turbocharged 6.0-litre V12, developed exclusively for Pagani by Mercedes-AMG. It produces 791bhp and 1050Nm (39bhp and 50Nm more than the standard model); all of which is sent to the rear wheels via a seven-speed, paddle-shift gearbox and an electro-mechanical differential.

An all-new monocoque, made from a blend of carbon-fibre and titanium, underpins the Roadster BC. Pagani also says that every panel on the Huayra Roadster BC differs from those fitted to its standard counterpart, with each being hewn from carbon fibre rather than aluminium, contributing towards the car’s 1,250kg dry weight.

Like the hardtop BC, it gets electronically controlled dampers, redesigned aerodynamics, lighter alloy wheels, and a set of carbon-ceramic Brembo brakes with six-piston calipers up front and four-piston calipers for the rear. There’s also a brand-new titanium exhaust system, which works with the rear diffuser to generate additional downforce.

The Pagani Huayra Roadster BC recently made its virtual debut in the mobile racing game, CSR Racing 2. The hypercar will make its physical debut during the 2019 Monterey Car Week, where it will feature in the Pebble Beach Concours d’Elegance.

Now read our run-down of the best hypercars on sale in 2019. Let us know your thoughts in the comments section below…