'Perry McCarthy is one of my favourite drivers, despite his terrible F1 career'

Perry McCarthy may have had a poor time in F1, but he is still one of the sports best, explains Mike Rutherford 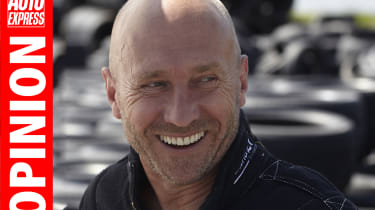 Honestly, it’s been a pleasure and a privilege to ride (and occasionally drive) with a few famous Formula One faces over the decades. Some were here today, gone today types that merely helped make up the numbers. Remember Taki Inoue and his comedic five minutes of fame?

Others seemed stuck in midfield territory because, despite seeming to have talent, they found themselves in the right teams at the wrong times, with the added problem of lacking hunger and confidence. A perfect example was serial ‘nearly-man’ Martin Brundle, formerly of this parish (where I ghost wrote his post-race columns that couldn’t mention his GP wins – because there weren’t any). Mind you, it’s good he’s taken over from Murray Walker as the voice of F1.

It’s blindingly obvious why I’ve included the first five in my ‘true greats’ list. Number six is harder to explain. McCarthy’s GP record wasn’t great. It wasn’t even good. But if you’re looking for the funniest, best value, most healthily cynical bloke on the F1 scene over the last three decades, look no further.

After it didn’t quite go to plan in GP racing, Perry drove for Audi at the Le Mans 24 Hours; he’ll go down in history as the first Stig; he’s carved out a successful career as an after-dinner/motivational speaker; and he even became a best-selling author with his hilarious Flat Out Flat Broke book.

At 58, 15 years after he ‘retired’, he’s now the comeback kid/dad – thanks to his decision  to race in the TitansRX European Rallycross Championship, where he describes the start-line process as similar to pulling the pin out of a hand grenade then waiting for the explosion (behind the wheel in his case) to occur. But he still keeps tabs on his old pals plus the new kids in F1. And while it’s no surprise that he nominates “genius” Lewis Hamilton, Max Verstappen and Sebastian Vettel as his top drivers (in that order), he talks with almost as much enthusiasm about Alexander Albon and Lando Norris.

As for Formula E, McCarthy sees it as an inevitable and welcome addition to global motorsport. And he agrees that the drivers and teams are hugely talented, committed and professional. But he hints that it’s spoiled by temporary circuits that are too narrow.

McCarthy’s from a modest background and his financial troubles were far greater than most F1 drivers’ (he half-jokes that he looked for a fast-food sponsor so he could put meals on the table for the family). I’m surprised he doesn’t object to TV viewers having to pay to see live F1 races on satellite television. He argues that, compared to the cost of dad, mum and two kids travelling to and paying to attend a Grand Prix, TV viewing is a bargain.

F1’s greatest off-track showman, McCarthy could and should be more involved. A good start would be to motivate drivers who seem tired, miserable, jumped up and less than hungry to win. Let’s face it, most of them need a kick from someone like Perry. And while he’s at it, he can teach them to get a personality... and talk proper. Ain’t that right, Kimi?

Do you agree with Mike? Click here to read some of his other Opinion columns...