Do roundabouts get the appreciation they deserve? Take a look at the UK’s 12 best and tell us about your favourite roundabout... 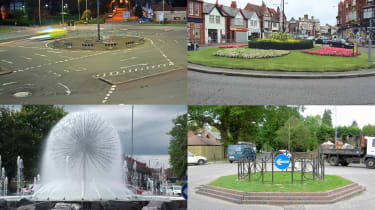 To most of us, a roundabout is a purely functional device employed by road designers to facilitate the smooth flow of traffic at a junction. Motorists will use them every day and never give them a moment’s thought, but there’s more to the humble roundabout than most of us give it credit for.

Indeed, some roundabouts are far from humble. The UK’s best roundabouts can be islands of creativity, history and cultural significance rising majestically from the Tarmac – you just have to know where to look.

• What do Highways England Traffic Officers do all day?

One man who does is Kevin Beresford, arguably the country's foremost roundabout aficionado and the president of the UK Roundabout Appreciation Society. He’s picked his 12 favourite UK roundabouts below and given us some expert insight into what makes them stand out in the world of circulatory road junctions. Scroll down to see Kevin’s choices and tell us about your favourite roundabout (we know you’ve got one) in the comments section below. 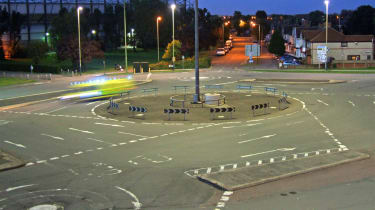 Arguably still the UK’s most famous roundabout, Swindon’s ‘magic roundabout’ was built in 1972 and is comprised of five mini roundabouts positioned around a sixth central circle. The highly efficient and safe design is, nevertheless, notoriously daunting for uninitiated drivers, but after a few circuits most get the hang of it. Similar designs have sprung up around the UK including notable examples in Colchester, Hemel Hempstead and High Wycombe – but Swindon’s magic roundabout is the original and best. 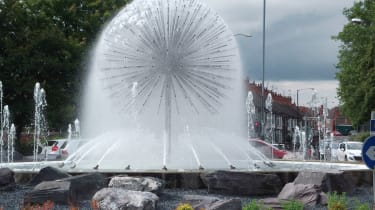 This Nuneaton roundabout offers a true sensory experience, according to Kevin. Not only do you get to view the rocky landscaped garden with its intricate multi-fountain display, you can also feel the giant dandelion’s spray when your windows are down and the breeze is favourable. Convertible drivers might get a little more than they bargained for, however. 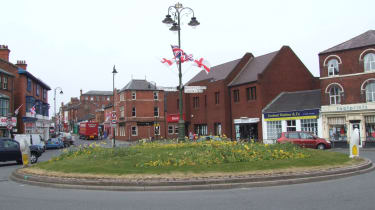 A sobering reminder that all roundabouts are fleeting. Kevin describes this as a double-kerber-Titchmarsh in reference to its twin-kerb design and floral display of the kind presumably favoured by the TV gardener, but sadly it’s a roundabout that has now been lost to the nation. Leek Council dug it up, ornate lampost centrepiece and all, to install traffic lights in its place. 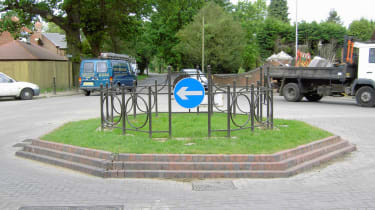 This small but unorthodox triple-kerb roundabout is a hidden gem from Dickens Heath in Solihull. Octagonal in shape and featuring unique ironwork at its centre, it’s a pleasure to circumnavigate. 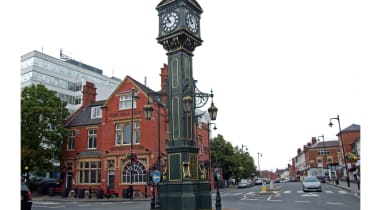 This imperious clock tower roundabout in Brimingham’s Jewellery Quarter dates back to 1904 and was built to commemorate Edwardian gentleman Joseph Chamberlain’s tour of South Africa following the end of the Second Boer War. If everyone commissioned a roundabout when they got back from holiday these days, the UK would be a more interesting place. 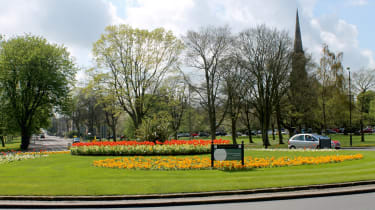 Sometimes, with roundabouts as with so many things in life, simplicity is best. The elegant lawned roundabout in Harrogate is a particular favorite of Kevin’s with its well maintained flower beds. “A roundabout is an oasis on a sea of Tarmac”, he says. 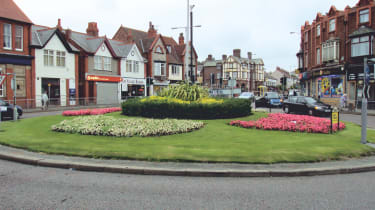 There’s nothing like a roundabout in full bloom. At least, not when you’re the president of the UK Roundabout Appreciation Society. This pristine traffic circle incorporates lawn, hedging and a central light feature that, in combination, are all but guaranteed to take passing motorists’ breath away.

Wars of the Roses roundabout, Tewkesbury 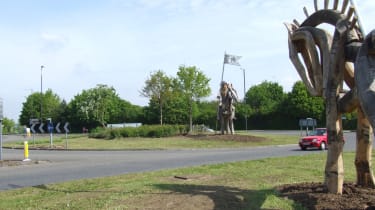 History and high art take roundabout form on the Wars of the Roses roundabout in Tewkesbury. The town was the site of one of the crucial battles in the famously long-winded 15th Century conflict and the roundabout commemorates that fact in sculpture form. A knight on a five-metre-high horse brandishing an eight-metre lance faces a second horse with its head bowed on the opposite side of the carriageway that represents the defeated Lancastrian army. 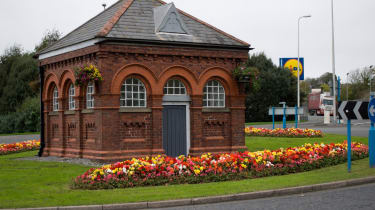 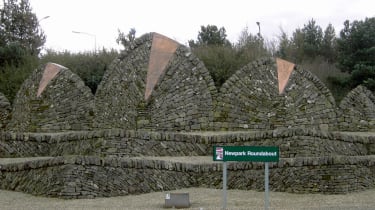 Kevin often ventures north of the border in search of interesting roundabouts and he points out that Livingston is a particular hotbed. The organic curves of this stone sculpture with inlaid copper sections create and ancient look that can be appreciated by visitors to the town. 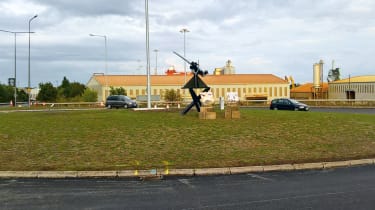 There’s an anti-aircraft gun in the middle of this roundabout on the A161 in Goole, East Yorkshire. It might not be the most aesthetically pleasing installation but it does have historical significance; sections of the Mulberry Floating Harbour were constructed in the area during preparations for the D-Day invasion. 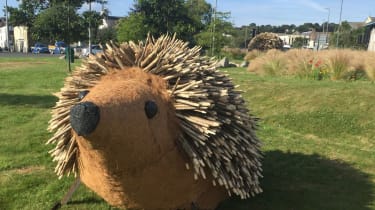 The UK has some mind-blowing roundabouts but none can match this effort in Truro, Cornwall – not in the eyes of the UK Roundabout Appreciation Society, anyway. It’s home to four hedgehogs named Cecil, Patricia, Denzil and Kizzy who were made from locally coppiced wood and placed on the roundabout by the Truro City parks Department. The UKRAS names this as their roundabout of the year for 2020. 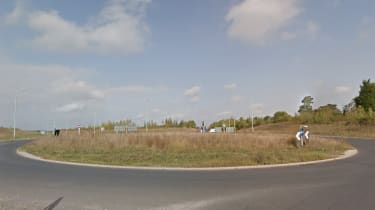 If you like driving then you’ll have a favourite bit of road. Whether that’s a series of hairpins strewn over a mountainside, a simple country lane or even just a simple roundabout. Well, my favourite of the latter is also the nearest one to where I grew up, and more poignantly, where I learnt to drive. Junction 49 on the A14 might look exceptionally drab and soulless, but for a young, over-enthusiastic driver, it proved anything but that. 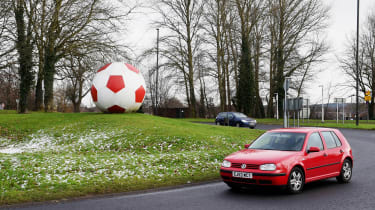 I’m not the kind of person who goes around ranking roundabouts for their decorative or historical merits, let’s get that out of the way right from the outset, but If i had to pick one it would be this. The giant football roundabout of Crawley is a landmark in a town that isn’t over-endowed with them and it’s positioned adjacent to Broadfield Stadium, home of Crawley Town FC, so it’s appropriate as well as eye catching. 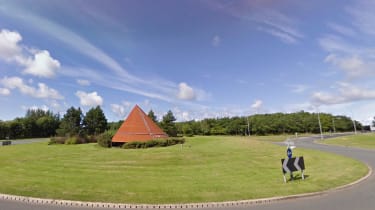 The roundabout at Lillyhall Business Park in Distington, Cumbria is a rather mundane addition to this otherwise colourful round-up. Its only defining feature is an enormous rusted steel cone, erected to honour the region’s industrious history and stamped with the name of the industrial estate on which it sits.

Lillyhall roundabout is one of the major intersections of Western Cumbria, which connects the ports of Workington and Whitehaven with the picturesque town of Cockermouth. Generally, it’s packed full of disgruntled commuters in the morning and overloaded with articulated lorries during the evening.

However, if caught on a quiet day, it’s good fun to drive on. Approaching on the northbound carriageway of the A595 from Whitehaven, the first exit (onto Jubilee Road, which heads towards Workington) is a well-cambered left-hander, which my old Mini can tackle near enough flat-out in third gear – at a dizzying speed of 40mph. 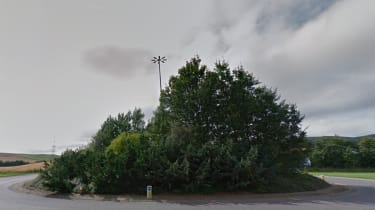 Sweaty palms. Intense concentration. Coordinating brain, eyes and limbs in foreign, seemingly impossible ways. The wild sweep of wipers working helplessly against a torrential downpour. The common-rail clatter of a diesel engine operated with a complete lack of finesse. Words of sage, pragmatic direction from the passenger seat.

Even a decade later, thinking about the roundabout at the junction between the A96 and A97 is enough to conjure up crystal-clear memories of learning to drive. I hadn’t thought about roundabouts in any detail before – and I bet you hadn’t either – but we probably all have one we remember like this.

What’s your favourite UK roundabout? Tell us in the comments section below and send us a picture on Twitter or Facebook. If you find yourself getting the roundabout bug, you can buy the latest ‘Best of British Roundabout calendar here…