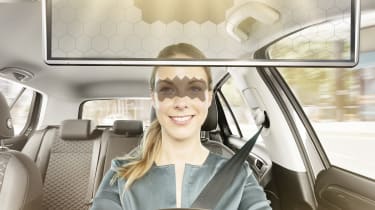 A new digital sun visor that tracks the sun's rays and the position of a driver’s eyes, darkening only in essential areas, has been developed, improving on the traditional visor, which has been untouched since its development almost a century ago.

Bosch’s Virtual Visor replaces the traditional visor with a clear LCD screen, which can darken in sections to prevent the sun from dazzling drivers’, with all other sections of the visor remaining transparent.

While conventional visors are frequently readjusted as the car’s and driver’s relative position to the sun changes during journeys, the Virtual Visor tracks the position of the sun, using a driver-facing camera to determine which sections of the visor should be darkened in order to shield the driver’s eyes.

Department for Transport statistics for 2018 show 2,643 UK accidents - including 551 serious collisions and 27 fatalities - were caused by drivers being dazzled by the sun.

Commenting on his firm’s innovation, Dr. Steffen Berns, president of Bosch’s car multimedia department, said: “For most drivers around the world, the visor component as we know it is not enough to avoid hazardous sun glare – especially at dawn and dusk when the sun can greatly decrease drivers’ vision... Virtual Visor changes the way drivers see the road.”

Do you like the idea of an auto-dimming sun visor? Let us know your thoughts in the comments below...