Personalised plates are hugely popular, and we explain what to do to get a special number 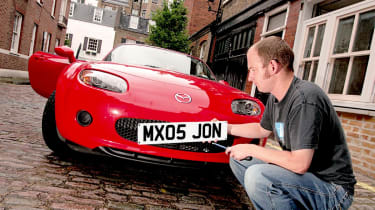 Looking for a gift with a difference, or a special something for yourself? Personal­ised car registrations make an excellent present, and one that can be kept forever.

The DVLA stocks more than 25 million number plates for you to choose from, and sales are growing. Last year, the total reached 232,000 – that’s the equivalent of one bought every couple of minutes, every hour of each day – compared with only 56,000 in 1995.

But how do you actually get a private reg? There are scores of agents to choose new plates from, and you can also buy direct from the DVLA.

Which you use is down to you, but remember, the independent companies are getting plates from the DVLA, too. Private sales of individual registrations – usually rare and expensive ones – are also popular, with ads in car magazines and newspaper motoring supplements.

Under the hammer The other way to get a reg is at a DVLA auction. There are six a year, in different parts of the country, and they usually feature exclusive plates that will fetch thousands of pounds. You can bid online, by phone, by post or in person. Log on to www.dvlaregistrations.co.uk and click on DVLA Auctions for details. But once you’ve bought the registration, you don’t have to put the plate straight on a car.

Every reg comes with a V750 Certif­icate of Entitlement, and on it is a date by which you must assign the plate. The document doubles as an application form when you do want to use the reg: simply send it to your nearest DVLA office, with the car’s V5C ownership document. You can also attend in person. Log on to www.dvla.gov.uk and click on Contact Us for the list of sites.

Dishing up the platesWhen that’s done, you can have the plates made up, and you’re ready to go. Remember, incorrect spacing of numbers and letters is illegal, although it happens often, as people try to contrive words or names. Strategically placed fixing screws aren’t allowed, either, and if the police report a car as being misrepresented – the official name for misspacing – the DVLA can withdraw the plate without compensating drivers. “Every customer is told about the law, so there’s no comeback if the advice is ignored,” said a DVLA spokesman.

Switching cars Moving the plate to another vehicle is straightforward. Both cars must be taxed, roadworthy and have a valid MoT certificate if it’s needed. The big rule is that the change can’t make a vehicle look newer than it is, so you’re banned from putting an 06-reg on an 05-reg or earlier car, for example.

You need to complete a V317 form, which is available to download on the DVLA website. The transfer costs £80.

What to watch for While getting hold of a private plate is straightforward, there are pitfalls. The industry is not regulated, so unscrupulous operators see it as a way of making a fast buck. Always know who you are buying from; there are horror stories of people losing thousands of pounds.

A number of agents belong to the Cherished Number Dealers Association (www.cnda.co.uk). Beware sellers whose adverts give the impression they own all the numbers listed. They buy them from the DVLA, then resell to customers at a marked-up price.

Gambling on pricesSome people see a private plate as an investment – but will its value actually rise? “We’d never claim number plates should be bought for this reason,” said a DVLA spokesman. “But some of the dateless registrations have risen in value by 25-100 per cent since 1989.

“The popularity of the letter/number combinations has a bearing on what a plate is worth. And, of course, the initial purchase price is a key factor.”

The majority of buyers choose a personalised registration to reflect their initials. Plates spelling names or words are more costly, while buying characters associated with the car – such as 911, X5 or A6 – isn’t a great idea if you regularly change your vehicle.

In the run-up to Christmas, 40 per cent of sales are for presents. Prices start at £250.

Demand for personalised plates has risen dramatically since the DVLA started its sales business in 1989. Before that, they were available only through a handful of agents. Elite Registrations was one of the pioneers. 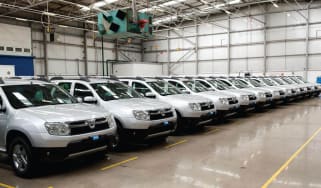