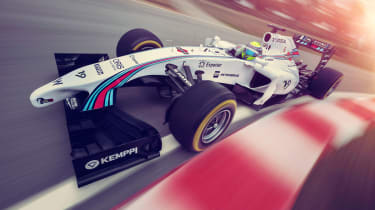 After years of stability, the technical rules that govern Formula One have been given a serious shake-up.

In a bid to make the sport more relevant to the cars we drive, the new regulations centre on making F1 cars more efficient. So the naturally aspirated 2.4-litre V8s have made way for 1.6-litre turbocharged V6s, supplemented by two complex energy recovery systems.

As we’ve already seen during pre-season testing, the new powertrains have given the teams plenty of headaches, but Mercedes and the Mercedes-powered Williams teams seem to have made the best of the new tech, showing their rivals the way.

As you’d expect, up and down the grid, the new cars offer a range of solutions to the challenges presented by the new regs. Our handy guide breaks down the tech changes, and gives an idea of what the teams are up against. 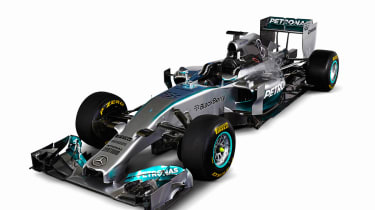 There are eight forward gears this year, not seven, but the ratios are fixed before the season starts. The gearbox has to cope with everything from the twists and turns of Monaco to the flat-out straights of Monza, but that shouldn’t be a problem given the extra torque from the turbocharged engines. As the tech is new, the FIA will let the teams change the ratios once this season.

F1’s ‘eco-friendly’ future means turbocharged, direct-injection 1.6-litre V6 engines. They produce around 650bhp at 15,000rpm, while the electric power boosts this by a further 160bhp. The new rules see the whole powertrain as a single entity, and each driver has five power units for the season – instead of eight engines. A change of any part like the turbo, exhaust or the electronic control is seen by the FIA as using a sixth power unit, which incurs a 10-place grid penalty.

This year, there’s one Motor Generator Unit (MGU-K) to harvest energy from the rear brakes, while the MGU-H uses heat from the turbo to generate electricity. Unlike last year’s driver-controlled KERS, the new energy recovery system is fully automatic. It’s also twice as powerful, at 160bhp, and this is available for longer – up from 6.7 seconds to over 30 seconds per lap.

With only 100kg – about 100 litres – of fuel available per race, sophisticated electronics calculate the most efficient use of electric and engine power. The electric turbo spins up quickly, minimising turbo lag, but the big challenge is mixing the smoothness of conventional hydraulic brakes with the harvesting of electronic energy by the MGU-K system when the car slows.

Pirelli will provide harder-compound tyres this year, and teams will have an extra set of tyres available for each race weekend. Plus, to ensure there’s no repeat of last year’s tyre problems, each squad must dedicate one of its eight days of in-season testing exclusively to work on tyres with Pirelli’s engineers. 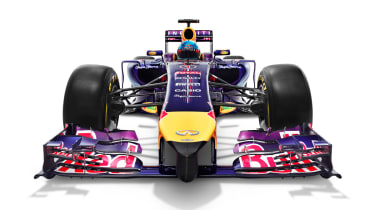 Noses have been lowered from 550mm to 185mm above the ground, in a bid to prevent cars launching themselves off other racers. But Red Bull’s ace designer, Adrian Newey, has already said that cars could end up submarining under the rear wheels instead. The front wing is no longer the same width as the car – it’s 1,800mm instead of 1,650mm. Again, this is down to safety, to stop drivers clipping each other’s wings, but it also has a big impact on aerodynamics.

The minimum weight of the car and driver has been increased from 642kg to 691kg to compensate for the extra technology that’s crammed into each car. The power unit has a minimum weight of 145kg, and the teams are struggling to keep the weight low. As every gram affects performance, expect F1 drivers to be skinnier than ever to make sure they get asclose as possible to the minimum weight allowed.

For 2014, the exhaust designs are simpler than in previous years. Instead of enormously complicated blown diffusers which used the engine’s exhaust gases under the car to reduce air pressure and increase downforce, there’s now a single central exhaust that exits at the rear of the car, behind the line of the rear axle.

At the back, the wing now features a single top section. This still features the Drag Reduction System (DRS), although it can now open wider than before. The lower beam wing has been outlawed, but teams like McLaren have done a tidy job of using wing-shaped rear wishbones on the suspension to compensate for this lost downforce.