Real-life beer goggles: we try a new suit that shows how dangerous it is to exceed the drink drive limit on the road 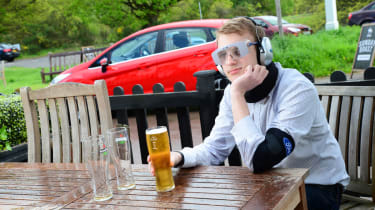 The UK drink drive limit is 35mg per 100ml of breath or 80mg in 100ml of blood. The big question you should always ask yourself before driving, though, is: should I really be behind the wheel?

Sadly, thousands of young drivers are still answering ‘yes’, with a Ford survey revealing that 56 per cent of 18 to 24-year-olds have driven while drunk, or have seen friends do so. That’s despite the fact 2014 is the 50th anniversary of the Department for Transport’s (DfT) first THINK! drink-drive campaign.

There’s little doubt that these campaigns have had a positive effect, but the results of the Ford research suggest there’s still much more to be done.

• Autonomous braking in cars: everything you need to know

The number of accidents involving drink-drivers has fallen from 19,470 in 1979 – when the Government started recording data – to 6,670 in 2012. But how many are still drinking then climbing behind the wheel and not getting caught? Take a look at the 2013 Christmas period where officers stopped 191,040 drivers in England, Wales and Northern Ireland. Of these, 6,550 recorded positive or failed readings or just refused the test. A quarter of these were under 25.

Why do motorists still take the drinking and driving risk?

So why are people still risking lives by drink-driving? Perhaps they don’t realise how badly their driving can be affected by being only a little over the legal alcohol limit. After all, if you make the decision to get behind the wheel, you’re unlikely to notice if you’re swerving across lanes or narrowly avoiding obstacles. Other myths are all too prevalent as well, according to the DfT. The organisation said a third of young drivers thought it was fine to drive a few hours after their last drink, while two-thirds wouldn’t be concerned by alcohol that had been drunk with a meal. 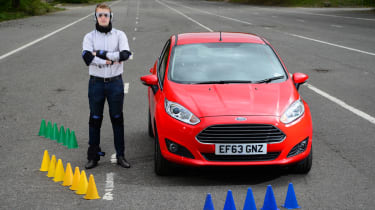 To shed some light on just what alcohol can do to a driver, Auto Express teamed up with Ford. The manufacturer has a drink-drive suit – designed as part of its Driving Skills for Life programme – which simulates the effect of being under the influence.

It couples carefully placed weights with pads on your joints to restrict movement, as well as a neck restraint, headphones and beer goggles. We were interested to give it a go and find out what drink-drivers are risking behind the wheel, but also understand just how badly our own driving would be affected by ‘alcohol’.

Not that we’d be in danger of injuring anyone or being stopped by the police, as we’d cordoned off an area of a test track. Armed with some cones, a Ford Fiesta 1.0-litre EcoBoost and Keith Freeman – an AA DriveTech instructor – we set up a series of challenges to test how tough it is to drive after a few pints.

The beer goggles create two overlapping images, neither of which gives a clear picture of what’s ahead. This meant the first challenge of slaloming between the cones, with sharp changes of direction, was confusing and disorientating. More surprising was the difficulty in steering, due to the imbalance created by the weights and elbow pads on our arms and legs. “I can see you’re having to concentrate,” said Keith. “Normally we’ll see jerky or abrupt steering and throttle inputs and drivers compensating for their actions.”

Reverse parking proved trickier, with the narrow gap looking much smaller through the beer goggles. The lenses hampered our spatial awareness, making things seem much closer than they actually were. 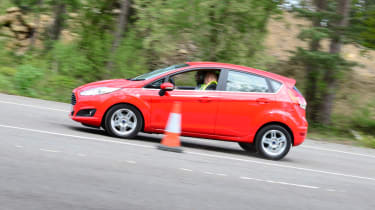 The end result? We parked the Fiesta at an angle, resting on one of the cones. Keith said: “It’s really interesting to see how you over-compensate from the mistake on the first go and that you thought you were straight, right up until you removed the glasses.”

We moved on to the 40mph emergency stop, and Keith told us to really slam on the brake. But with a heavy weight fitted to our right ankle, it took us longer to move from pedal to pedal and react to Keith’s instructions than it normally would. Had there been something in front of us, we’d probably have hit it. 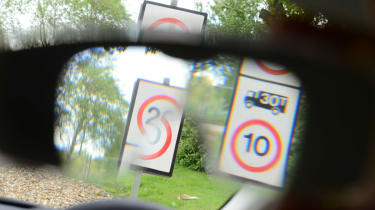 Outside the car, tests like catching a ball, walking along a line and touching our nose proved just as tricky. The weights made us walk uncannily like a drunk – to the amusement of Keith and our photographer.

Taking instructions in the test also proved difficult, with the noise-reducing headphones making Keith’s voice faint. Plus, as we could barely hear the engine, we didn’t know when to change gear and couldn’t tell if we were over-revving.

However, while the suit accurately replicated the feeling of being drunk, we still had full control over our brain. The mental effects of alcohol, which influence your decision to climb into the car in the first place, can’t be recreated here.

Sometimes people need to be told they’re not fit to drive, but the latest THINK! campaign suggests passengers aren’t always keen to. One in four said they’d been in a car with a driver over the limit, but were too embarrassed to act.

Having seen what alcohol can do to your driving ability, there’s no room to be shy – your life could depend on it.