Alex Zanardi: getting back on the track as an amputee 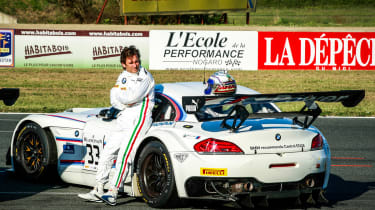 On 15 September 2001, Alex Zanardi was just another racing driver, lining up on the grid for a Champ Car race at the Lausitzring in Germany. The mood in the US-based series was already sombre following the terrorist attacks on New York a few days before, but towards the end of the race, the Italian suffered a horrific crash that led to both legs being amputated – one above and one below the knee. The mere fact he was still alive was seen as a minor miracle, but surely he would never race a car again?

Like all professional racers, Zanardi had lived for motorsport, but did not immediately think about a return. Inevitably, friends and journalists kept asking if he would, and three years later he did just that – defying doctors who said he’d never even walk or drive a road car again. Zanardi’s successful stint in the World Touring Car Championship from 2004 to 2009 was hailed as an inspiration, but he was only getting started.

Stepping away from motorsport to focus on handcycling, he won a gold medal at the London 2012 Paralympics, gaining a whole new legion of fans. Now, he’s back in the cockpit of a racing BMW again, tackling the Blancpain Sprint Series in a BMW Z4 GT3 car. We caught up with the Italian to discuss his incredible journey to date.

After you accident in 2001, did you feel certain you’d race again?

“It was not my main problem or desire, because at the time my worries were whether I could rapidly recover the type of life I wanted to live. At the beginning, I could not be self-sufficient for my basic needs. So that was my main problem, but friends and journalists asked me whether I would go back many times.

They said it would take some type of courage to step back into a racing car after what happened to me. But I don’t think it’s a question of bravery or being crazy, I just believe that my attitude is very objective. What happened to me is behind me – it cannot affect my future unless I take advantage of the experience.” 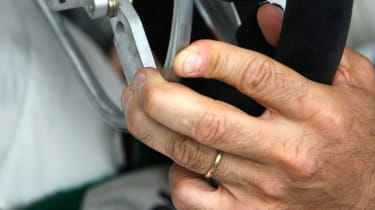 Can you describe how you developed your hand controls?

“There were some solutions out there, but I was a pioneer for myself. When you jump into a car – not even a racing car, a road car – you just move the seat position, maybe adjust the wheel and there you go. You just take for granted that the engineers know where to put everything. That comes from over 100 years developing a machine around people’s needs.

My needs are completely different, so whatever I have to develop only works for me and not for others. That’s what I have to do my own development work. What we ended up with is not particularly complicated. Thanks to the work of the ROAL team, we were able to develop rough but efficient controls that were then refined into something more sophisticated by BMW in Munich.”

You use your left prosthetic leg to brake – did you do that from day one?

“No – the very first time, we used hand controls. I basically had a big ring behind the steering wheel to operate the brakes with a power brake system, and a second over the wheel to control the throttle, via a motor. The clutch was a control on top of gearlever. That was a mess – approaching corners, I was pulling the brake with my left fingers, blipping throttle with my left thumb and operating the gearshift and clutch with my right hand. All I had to control the steering was the palm of my left hand, so that was definitely too much!

Joking, I suggested if they gave me a little brush, I could hold it with my teeth and clean the cockpit while I was driving! That was when I suggested they could build a sort of ‘second shoe’ to hold my prosthetic foot, which would be mounted on the brake pedal. 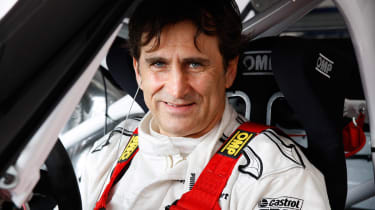 The engineers were reluctant at first, because they thought I wouldn’t have enough strength to brake hard enough. When we first went to the circuit, the mechanism was far from being completely developed and optimised, but I realised immediately that it would allow me to drive well and be sufficiently fast to be competitive.”

Was it emotional lining up on the grid at Monza for your first race back after the crash?

“That was predictable, and everything that is predictable in life very rarely creates any special emotion. It’s more the stupid things you end up doing without thinking that may create an emotion that shakes you up. I remember when I was asked what my size was to fit some new racing overalls, I just said to myself ‘I have an old pair of overalls at home, I can try them and if they still fit then I know that my size hasn’t changed’ – when you get prosthetic legs, it can be different!

So I dressed myself, and when I zipped them up and looked at myself in the mirror, I was not prepared to see what I saw – the fact that I looked like a racing driver again. That was an emotional second that lasted very briefly, but it was strong. It was like when I first stood up in prosthetics. Everyone says ‘that must have been very emotional,’ but that was predictable – I knew I was about to do that, I knew what I had to expect, so it wasn’t a surprise. It’s like the difference between winning a single race and winning a championship. You can win a very unpredictable race, as a result of which you may become very emotional. 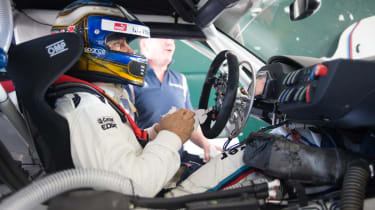 That happened in my career many times, like at Laguna Seca in 1996 when I overtook at the Corkscrew, or Cleveland 1997 and Long Beach 1998, where I came back from a lap down – those were really very emotional days. With a championship, you see it coming, and when you finally can call yourself the champion, you’re certainly very happy, but at the end of the day, it’s something that you expected. Monza was more emotional due to the reaction of the people. There were as many fans there as Formula One would normally get and when we opened the garage door for the grid, there was a wall of people – that was emotional!”

You’re back racing this year after your Paralympics success – how are you enjoying it?

“I won’t surprise you by saying I love it – motorsport has always been my passion, that’s what led me through all the obstacles I had to overcome – like all racing drivers I guess. You don’t do it just to become famous, sign autographs and kiss nice girls; you do it because you love to drive a racecar and that’s what drives you. I was lucky enough to have a decent career and get results I could be proud of World Touring Cars after my accident, and then it came to a point in my life when it was time to do something different.

So I stepped out of that situation for four years to refresh my passion and concentrate on handcycling. When I got the offer to drive for BMW in the Blancpain GT Series this season, I looked at it with a lot of interest. When I saw the car the first time, I just fell in love with it – it was so sexy and it’s also a very exciting machine to drive. I’m really enjoying it and very much hoping to score good results.” 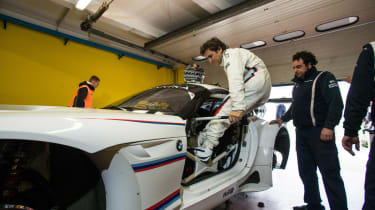