"For most motorists today, hydrogen cars are irrelevant - and probably always will be"

The tech is there, but the energy industry and governments aren't investing enough in hydrogen, says Mike Rutherford 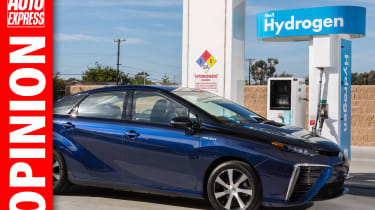 In the western world’s car capital (LA) last week, I overdosed on an emerging but rare ‘drug’ –  hydrogen.

Among politicians and some motor industry folk, the H word is becoming an obsession. Yet for the vast majority of current motorists it’s irrelevant, and probably always will be.

At best, real-world low to mid-budget drivers must wait decades before they’re able to buy widely available, affordable H cars. At worst, such vehicles could follow in the embarrassing footsteps of 100 per cent electrics, which have been a bit of a flop.

• "If Tesla made hydrogen cars, refuelling wouldn't be a problem"

Yet hydrogen-themed breakfasts, stage presentations, press conferences, lunches, workshops and late-night discussions were so prevalent at the LA Motor Show that new, accessible and comparatively inexpensive conventional cars were almost overshadowed by the H-related preoccupation.

Even after OD’ing on H and trying to escape it for a while by driving across LA in a Volkswagen Passat and then Audi A7, both were powered by – you’ve guessed it – H fuel.

These German prototypes were more than able to satisfy the everyday demands of drivers, and easily capable of coping with 21st century streets. But – and buts don’t come bigger than this – hydrogen filling stations for cars are thin on the ground in the USA, rare in Europe and non-existent in Britain.

• Every BMW to get plug-in hybrid option

Or to put this another way, the likes of VW and Audi have the tech – but the energy industry and governments are not investing enough on the infrastructure required to refuel hydrogen cars. And who can blame them when the cost worldwide is countless trillions of dollars?

So why is the Volkswagen Group seemingly fixated with hydrogen? I reckon it’s partly because there could be plans afoot for Audi to develop its sports car programme as a hi-tech hydrogen-power test bed.

And in the face of gross lethargy from the energy giants and politicians who refuse to fund those expensive hydrogen filling stations, the VW family should establish a large refuelling network of its own. If it doesn’t, it might find itself in the hopeless position of trying to sell hydrogen cars to motorists who can’t buy hydrogen fuel. And that’d be as daft as Apple trying to sell mobile phones without rechargeable batteries.

Do you think hydrogen is the way forward if the infrastructure was in place? Let us know in the comments below...