"Transport is as much of a day-to-day issue as crime, the economy and immigration" 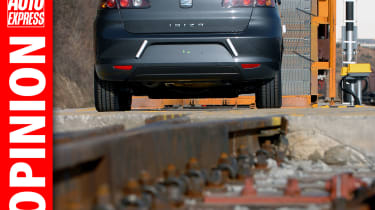 The big news topic in the final days of 2014 and the first few of 2015? Undoubtedly, transport and related issues.

Some of the railways and trains trying – and failing – to serve as alternatives to roads and cars were disgracefully shut down or withdrawn by fat cat rail bosses who regularly rip off, delay or abandon their human cattle passengers.

• "My New Year’s resolution is to pay full retail price for, er, nothing"

Too many planes plummeted to the ground or seabed with terrifyingly fatal consequences. But at least no lives were lost when a Virgin jet performed a crash, bang, wallop emergency landing at Gatwick. Meanwhile, winds blew an aircraft off a Scottish runway. Honest.

Temperatures in Blighty fell to minus 10oC. So why lie to yourself by pretending that bicycles are a good idea in winter when there’s more dark than light, and rain, ice, wind, fog and snow are the norm?

A blazing ferry killed innocent folk and, separately, ghost ships overloaded with refugees (but zero crew) sailed the seas. In Calais, fences designed to keep illegal immigrants out of Britain collapsed, while violent battles were fought by the illegals and others who tried to secure hiding places on UK-bound lorries.

Off the Southampton coast, a skipper deliberately grounded his vessel full of factory-fresh cars. Are they now squashed and salt-water damaged? Probably. Will they be scrapped? Probably not. Bear this in my mind when you next shop for a ‘new’ motor. It gets worse. Extremists aiming to create travel chaos hacked into the UK’s public transport timetable system. And a foreign trucker was remanded and tried following the death of three car occupants on the M26, where LHD lorries dominate.

The above is the tip of the iceberg and illustrates that transport is as much of a day-to-day issue as crime, the economy, education, health, immigration and unemployment. Real-world Brits know and accept this. Our clueless, out-of-touch politicians don’t. Not even in a General Election year like this one. Shame. The party that gets its transport policy right could – perhaps should – become the party of government.

Do you agree with Mike that transport policy is as important as crime, eduction, health and unemployment?