“The 20-year warranty is available in the US, and it could be bound for the UK”

On a recent trip, Mike Rutherford visited a Miami auto mall to find a 20-year warranty on offer. Could it be coming to the UK? 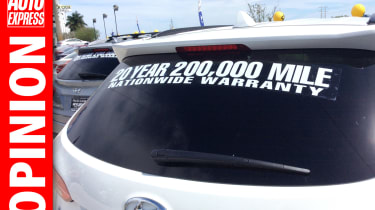 I cased a few of the Case joints west of Miami the other day. Rick and Rita Case (he never wears a cowboy hat, she never takes hers off) are mega-dealers. They’re multi-franchised and own and operate an auto mall half an hour from Miami Airport.

Truth is, when I heard about their business and saw it on the map out near the Everglades, I was expecting something a little tacky, old school and in the wrong part of town. But I couldn’t have got it – or them - more wrong.

As I drove on to their colossal and pristine premises, it seemed bigger and more impressive than most of the small to medium car company headquarters I’ve visited around the world. Rick and Rita are so big, they’re more motor industry than motor trade.

Why stop by at the Case place? Because I heard it gives away a 20-year “factory warranty” with every new Hyundai it sells. Rick and Rita even say how much such cover is worth to the typical customer – $4,128 (£2,677). There are terms and conditions, of course. A Hyundai bought today must not exceed 200,000 miles between 2015 and 2035. And – you’ve guessed it – there are strict conditions on who can and can’t service the vehicle during the warranty term.

Such rules work largely in Rick and Rita’s favour – these hard-nosed entrepreneurs wouldn’t be giving away cover worth thousands if they weren’t obliging customers to return to Case’s workshops for a decade or two, to spend even more thousands on servicing.

• How to scrap your car: all you need to know

A deal like this creates countless pros and cons. And there are unanswered questions, too. Such as will a near-worthless 19-year-old, 190,000-mile Hyundai that blows its engine really be fitted with a new power unit, free of charge, on the eve of its 20th birthday?

But let’s not be ungrateful or too sceptical. Customers are undoubtedly better off with 20-year cover than without it. So will a UK Hyundai dealership be following Rick and Rita’s generous example anytime soon? No, sadly. The story doesn’t end there, though. Longer term, I understand Brit buyers – with or without Rick and Rita’s help – could be offered new cars with similar 20-year warranties. Yes, think Hyundai. But also think Kia... plus the dark horse that is Mitsubishi.

Would a 20-year warranty tempt you into a new car? Let us know!