The importance of tyres at Le Mans 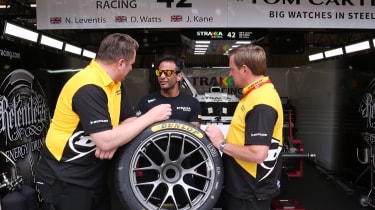 Whether you’re a professional driving for a big manufacturer in the LMP1 class or a wealthy amateur fortunate enough to be able to take part further down the grid, tyres are an essential facet of Le Mans - and indeed any race. But with the French classic lasting for a full 24 hours and taking in some bumpy sections of closed road as well as smoother racetrack tarmac, the durability and consistency of a tyre become as important as how much grip it gives.

The top LMP1 prototype class is currently the preserve of Michelin, but in the second-tier LMP2 protoype category, Dunlop is the pre-eminent manufacturer, supplying 15 of the 19 teams. The challenges here are just as demanding, and each team supplied by Dunlop has dedicated company engineers working with it to get the best out of the tyres all race long.

British outfit Strakka Racing is just one such team - headed up by owner/driver Nick Leventis, it has competed at Le Mans every year from 2008 to 2013, before taking a break in 2014 to develop a new car in conjunction with renowned Japanese motorsport manufacturer Dome. It’s back at Le Mans this week in the LMP2 class, with Leventis joined in the car by the experienced pairing of Jonny Kane and Danny Watts to form an all-British line-up. 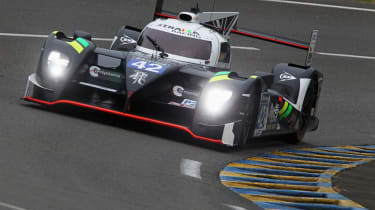 It recently elected to switch from Michelin to Dunlop rubber, bringing it into line with the majority of its rivals here at the Le Mans 24 Hours. The British team’s technical director Jay Davenport explained the affect the switch can have on how the car is engineered and set up: ”We have to take into account the different characteristics of the new tyre, adjust the ride height and compensate for how it affects the handling balance.”

Dunlop supplies a range of compounds to the team, ranging from soft to medium, ‘medium+’, intermediate and wet. The soft tyre will be the fastest over a single lap and heats up the quickest, but will obviously wear out quicker. Teams are allowed use seven sets of tyres in practice, qualifying and warm up and an allocation of 16 to use across the 24-hour race.

Tyre manufacturers like to talk about technology transfer between the racetrack and the road, and although there’s no possibity of the tyres fitted to the Strakka-Dome protoype turning up on a production sports car you can buy, engineer Matthew Rees says there are other areas of co-operation bewteen the two sided of the company.

“Concepts are shared and we have access to a company-wide materials database, so if we need a certain type of material or compound to achieve a certain result, we can end up using something developed by the race team and vice-versa,” he told us.

The Dunlop engineers’ primary function is to work closely with the team and drivers they’ve been assigned to - so much so that they almost feel part of the team. Rees’ colleague David Billingham previously worked with Nick Leventis and the Strakka team in its early days and says he’s glad to be back in their garage this year. “There’s information sharing between the Dunlop guys on each car, but also competition - we all want our team to beat the others.” 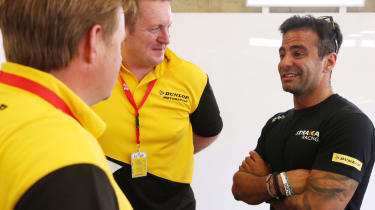 Billingham makes the point that tyres are the only major change teams can make to their car during the race without pulling the car back into the garage and losing time adjusting suspension or aerodynamic settings. His most important role is to work with each driver to ensure they have the tyre compound and pressures that suit them best.

“Some drivers are easier on tyres than others,” he explains. “Some can go for three or four stints - others prefer two. If a driver’s going to be slower on worn tyres, you’ll lose less time just changing him onto new ones at the stop than you would leaving them on.”

Changeable weather conditions adds a whole other dimension to the tyre puzzle and this is where Dunlop’s intermediate tyre - generally known as the ‘inter’ - comes into play. It’s a sort of half-way house between the smooth, grippy racing slicks used in dry weather and the typically grooved wet-weather tyres that are look closer to something you’d see on a road car. It plugs the gap between the two types to offer optimum grip in light rain or when a wet track is drying out. 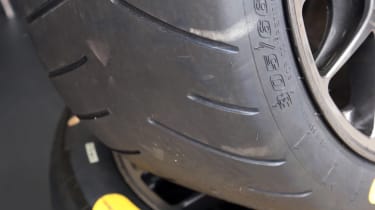 “The inter is great and it really helps your confidence in tricky conditions,” says Leventis. “It’s been good to have had lots of running on it given the weather we’ve had at Le Mans so far this year. If you’re on dry tyres and it starts to rain, you’re feeling for the traction under acceleration and the grip in high-speed corners to decide when it’s time to change to inters or wets. It’s tricky at Le Mans, because it sometimes look wetter or drier than it is.”

But it’s not just drivers’ intuition that the teams rely on when making decisions like that - like road cars, race cars these days have sensors in their tyre valves that can relay critical information such as temperature and pressure to the engineers - transmitting the data via radio waves back to the pits as the car races around the track. 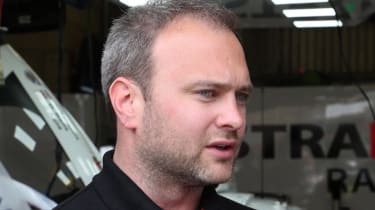 As Davenport explained, this comes in particularly useful during one of the most crucial phases of the race - the formation lap just before the start. “The rules allow us to go to the grid with an old set of tyres we used in practice or qualifying, then we put a new set on at the last minute. As the driver is going around on the formation lap, the sensors are telling us if the pressure and temperature is high enough to allow him to push hard into the first corner. If not, we can feed that back to him on the radio and he can work to heat them up a bit more before coming around to the start.”

The sensors also warn of a slow puncture - potentially even more dangerous on the racetrack than it is on the road - usually before it gets serious enough to be noticed by the driver. It’s just one more parameter to keep an eye on in the long and complicated road to success at the Le Mans 24 Hours.

Find out more about this year's race by reading our 2015 Le Mans 24 Hours guide.