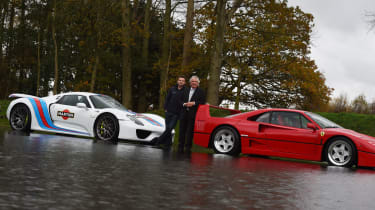 It is the ultimate supercar showroom… on water. Dealer Tom Hartley has literally bridged the gap between a traditional forecourt and luxury supercar heaven with a £200,000 floating underwater bridge across the lake that is next to his showroom in rural Derbyshire.

Tom, who has built up the most successful independent supercar and classic car business in the country with his son and now co-owner Carl, wanted to bring a new dimension to selling cars with his ‘floating bridge’, and believes it will act as a spectacular shop window for his elite fleet. Explained Tom: “We are selling the most desirable cars in the world, some with a price in excess of several million pounds, and we wanted to display them in a special way that would make the buying experience even more unforgettable. It’s been a huge technical job to build the bridge just under the water, but it’s given us something unique. 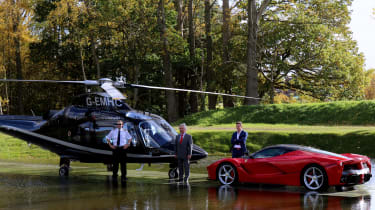 Our customers all say the same thing: ‘Amazing’.” Customers who travel to his showroom already enjoy a tailored 24/7 five-star service that Tom and Carl deliver 365 days a year, including Christmas Day. The VIP service offers clients a Rolls-Royce pick up from any airport in the country, dining room and spa treatments, an overnight guest house for customers who have travelled long distances and even a private cinema with a bar on site.

Many fly in by helicopter and can now land on the lake alongside the supercar they are about to buy. The floating showroom is the latest chapter in an incredible business story that started when Tom left school at just 12 years old, with no qualifications, but a burning desire to be the best car salesman in the world. He learnt his trade in the second-hand auction halls of Glasgow, where he was taken by his father and friends as he was too young to drive.

Tom quickly became the ‘teenage tycoon’ of the motoring world, making his first million at the age of 18. He has gone from buying and selling cars for a few thousand pounds to a global business set to turn over in excess of £250m this year, and a client list that includes the rich and famous, foreign royalty and sporting superstars. 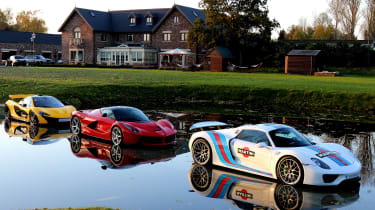 And in recent years he has extended the business to also specialise in classic cars, which have become a sound investment for the super-rich. Tom explained that the sale of classic cars took off after the financial crash of 2008 and prices have been rising ever since. He said: “In 2008, the super-rich started to panic. They were terrified of losing everything they had worked for if the banks crashed. “So they took their money out and put it into assets they could see and touch. It created an unbelievable demand for classic cars and certain supercars. Prices rose at incredible speed, and they have just kept on going up.”

Tom and Carl have built up a reputation over the years as the people who can deliver supercars no matter the waiting list. And the formula for success? Tom says it’s simple: “We have a gut feeling about what cars the market wants, what people are willing to pay and the ability to deliver the cars they want instantly. “But it’s a feeling based on knowledge and contacts built up over 40 years. We also work 24/7; our business never closes. Most of our customers are successful business people working on tight schedules, so we work around their schedule and their timezone.” 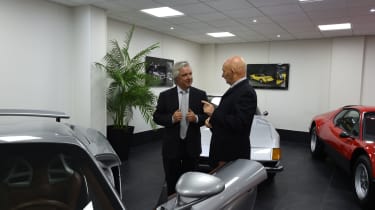 The first supercar Tom sold to a customer from his new lake showroom was a LaFerrari, the only used model available from a dealer anywhere in the world, and it went for a staggering £2.1 million – £1m more than it cost new. Tom and Carl may not have any formal educational qualifications, but they have a master’s degree in selling cars. And now with their groundbreaking ‘floating showroom’, the Hartleys are the supercar salesmen with the ability to walk – and sell – on water.

What do you think of Tom Hartley's floating forecourt? Let us know in the comments section below...