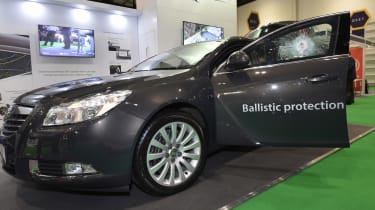 Rising fears of terrorist attacks, the threat of kidnap facing the rich and famous and spiralling world instability have sparked demand for the ultimate in personal protection: the armoured vehicle.

It's a phenomenon that recently saw 65,000 delegates from all over the globe converge on London's Docklands - many travelling incognito - for the Defence and Security Equipment International Exhibition at the ExCeL centre.

Gathered there were enough ground-to-air missile systems, sniper rifles, gunships, mini submarines, attack drones and tanks to start a small war. But it was the wheeled vheicles that most buyers came to see.

The unveiling of Jaguar Land Rover's new 'Sentinel' led a vast array of militarised and rugged versions of some familiar models. Here we take a look at some of the most striking vehicles on display - and we also got behind the wheel of a unique new UK-developed armoured vehicle for a special first drive. 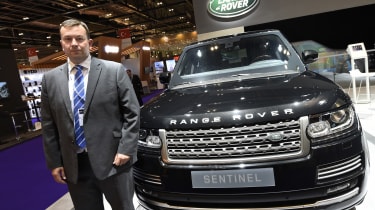 Made by Land Rover's Special Vehicle Operations Division, the Sentinel is the ultimate luxury armoured transport. It boasts ballistic steel and multi-laminated armour privacy glass and can withstand 7.62mm high-velocity, armour-piercing incendiary bullets, up to 15kg of TNT and hand-grenade explosions.

Driving characteristics are similar to the standard Range Rover's as a result of its modified suspension, braking systems and supercharged 335bhp 3.0-litre V6 petrol engine. 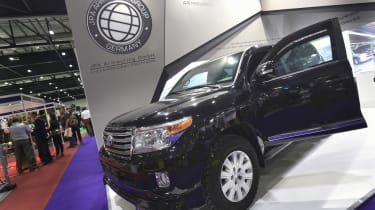 Germany-based JPA says the ruggedness and global parts availability of its armoured Land Cruiser mean it can be serviced and repaired 'almost anywhere'. It costs from £109,000 to £220,000 and weighs 4.5 tonnes, with the 4.5-litre diesel hauling it from 0-60mph in 15 seconds, and over 80mph.

It's been adopted by UK ambassadors, celebrities and members of the Royal Family. 'The Queen has one of our white limos... we're still working on William and Kate,' said a JPA employee. 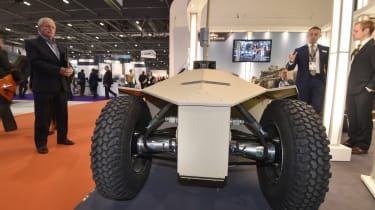 At ExCeL it unveiled MACE: a tiny, unmanned, self-driving, silent, electric, go-anywhere, all-wheel-drive vehicle equipped with lidar scanners and CCTV, capable of spying on enemy positions at close range. It's ideal for reconnaissance and IED detection, or as a 'scout' for following armoured vehicles. 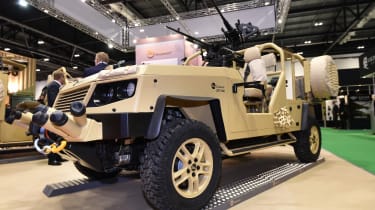 The Supacat, built in Devon, is the vehicle you wanted your Action Man to have. Bristling with machine guns, smoke grenade launchers, a self-recovery winch, a detachable polycarbonate windscreen - and capable of being converted in the field from a 4x4 to a 6x6 configuration - the Supacat is an immensely striking vehicle.Its 3.0-litre V6 256bhp diesel gives it decent performance too, with a top speed of 100mph.

Millbrook - famous for its proving ground and automotive design and engineering service - unveiled its latest armoured vehicle. It's based on a Vauxhall Insignia Sports Tourer and is dramatically scarred with bullet indentations on the toughened bodywork and passenger window.

It offers 'full 360-degree protection', with underfloor and side blast defence. Prices of the adapted vehicles vary depending on the final specification. 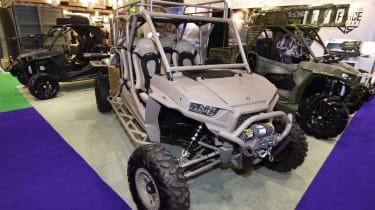 The US-built Polaris is a sports off-road vehicle, but West Yorkshire's Caged Steel Force takes the basic chassis and adapts it border patrol or medivac work in the desert, jungle or swamp.

The re-engineered lightweight buggies can be equipped with a 7.62mm machine gun, night-vision aids or a snorkel exhaust for wading through water at neck height. A four-cylinder 1,000cc engine propels the TALOS two-seater to 90mph. 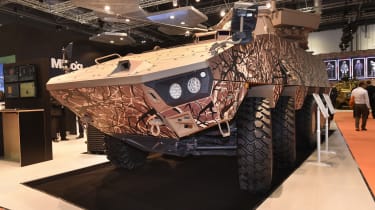 The exact specs and cost are closely guarded secrets, but the six-cylinder engine powers the vehicle to a maximum speed of 60mph and enables it to climb up 60 per cent inclines. It's also designed to be able to ford rivers up to 1.8 metres deep. 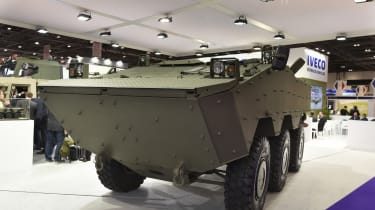 Italian brand Iveco is better known for its commercial trucks, but it's taken a leaf out of the Patria AMV XP's book with its striking BTP. At ExCeL the 7.0-metre long, amphibious armoured troop-carrier stopped show-goers in their tracks.

Powered by an 838bhp 9.0-litre bi-fuel common rail engine, the 18-tonne monster boasts six-wheel drive. The cost was undisclosed, and it's so secret that we were banned from filming inside. 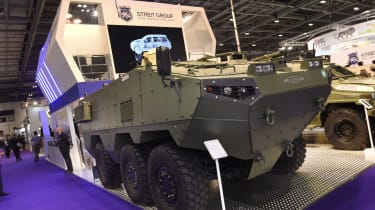 Claimed by Canadian maker Streit to offer protection in 'even the most hostile of combat environments', the rugged six-wheel-drive Varan armoured personnel carrier is a mobile fortress capable of operating in 'forward-fighting positions'.

Built to carry up to 10 personnel and withstand ballistic arms fire, mines and IEDs, it has a V-shaped hull to deflect potentially lethal blassts. It also boasts air filtration and a 395bhp Cummins diesel engine.

Check out our first drive of the British-built Ovik Crossway here...