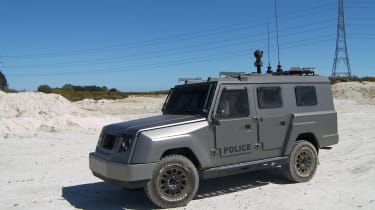 Having been impressed by some of the extreme vehicles on show at ExCeL, we were delighted to get our hands on a new armoured model destined for the UK - the Ovik Crossway - which will be pressed into service at Britain's nuclear power stations.

This formidable 4x4 takes its name from the small village near Dorchester, in Dorset, where it's built by Ovik - the company run by Jez Hermer MBE and his brother Duncan.

'I wanted an armoured box on wheels,' said Jez; and that's exactly what he got. Based on a fortress-like armour-plate cabin with glass-fibre wheelarches, the Crossway draws on Hermer's 23 years' experience with the Royal Marines and designing and building the last generation of armoured Land Rover Defenders (Pangolins) to be used by the Northern Ireland Police Force. 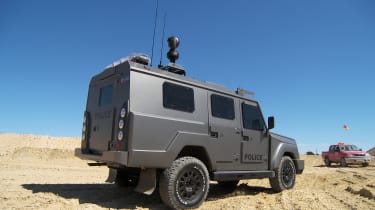 Intended for civil defence, the Ovik Crossway is heavier and tougher all round than the Defender. It stands on a beefy, square-section welded steel frame, with coil-sprung solid axles and a 197bhp Ford 3.2-litre five-cylinder turbodiesel engine. Plus, a six-speed automatic box drives all four wheels. It seats nine and weighs 4,050kg, with a 5.4-tonne gross weight.

The whole vehicle is built from scratch in-house by Ovik's team of 26 experts. It can be customised, too, in four different wheelbases, four or six-wheel-drive, as a chassis cab or pickup or a soft-skinned, aluminium-bodied civilian version. The cabin is accessed via heavy doors and is full of sharp metal. The seats are comfortable, but the driving position feels too high - this is specified by the client. 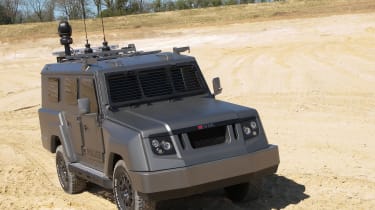 • 60 years of the Land Rover Defender

The engine rumbles through the cabin and gear selection is via a floor lever with a Tiptronic-style manual override. It pulls away smartly, but requires a hefty shove on the throttle to get up to cruising speed.

Once on the move, the steering is light and precise and the ride is good. The Crossway is a big, top-heavy vehicle, but it doesn't drive like one. Body roll is well controlled and it doesn't pitch or squat under acceleration of braking - the all-round disc brakes prove more than up to the job. 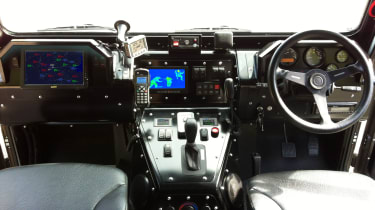 'We're not trying to be a Defender replacement,' said Jez. All the same, the Crossway is the ideal purpose-built vehicle to protect law-enforcement officers when the air is filled with bullets and bad intentions.

Check out our roundup of the best armoured vehicles at the ExCeL show here...