1957 Ferrari 335 sold at Artcurial Motorcars auction in Paris for 35.7m but expensive car record in dispute 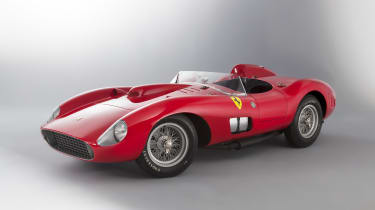 We may have a new owner of the title 'world's most expensive car'. A Ferrari 335 Sport Scaglietti has sold at the Artcurial Motorcars Retromobile auction in Paris for the princely sum of $35.7m.

The 1957 Ferrari sold for more than the $34,745,600 estimate to stake a powerful claim for the title of 'most expensive car ever sold at auction' but, typically, it's not as straightforward as all that.

• The most expensive cars ever sold

The current leader of the all-time auction list is a Ferrari 250 GTO which sold for $38,115,000 in at The Quail auction in Pebble Beach in 2014. The dispute arises from the fact that exchange rates have altered over time. This means that where the GTO's $38m dollar price tag translated to 28.5m euro at the time, the 335 actually sold for 32.1m euro, which is $35.7m according to today's rates. The debate will rage on but we've definitely seen the most expensive car ever sold in Europe go to a happy - and very, very wealthy - home. 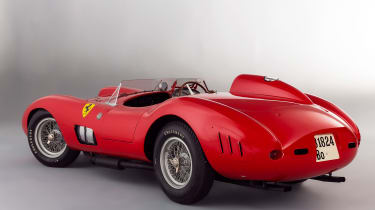 So what made that Ferrari 335 Sport Scaglietti so special? Beneath the impossibly curvy bodywork designed by Scaglietti , the Ferrari 335 Sport is an out-and-out racer with a 3.8-litre V12 engine. This particular car's first race was the Sebring 12 Hours where it eventually finished in 6th place before heading to the Mille Miglia where Wolfgang von Trips drove it to second place behind another Ferrari.

After this, the engine was enlarged to 4.1-litres back at Maranello and the car began competing again, setting a lap record at Le Mans with a driver pairing of Mike Hawthorn and Luigi Musso. The rest of the car’s history is long but detailed and is responsible for its huge estimated price. 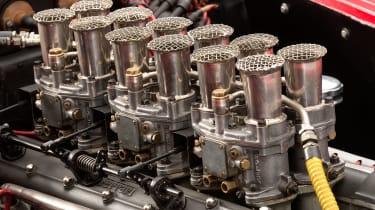 Wherever the car ends up on the most expensive cars sold at auction list. It's a list dominated by Ferrari – in fact, there’s only one other manufacturer represented in the top 10. Every car in the top 10 was sold after 2013 too, showing a huge increase in interest in classic cars as investments.

What do you think of the Ferrari 335 Sport Scaglietti? Let us know in the comments...