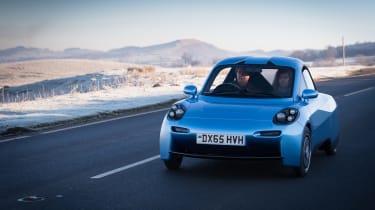 This is the Riversimple Rasa. It’s a two-seat, hydrogen powered road car that will hit roads in the UK later this year capable of travelling 300 miles on a single tank of hydrogen.

Purpose designed from the ground up and built with ‘ultimate vehicle efficiency’ in mind, the Rasa uses an 8.5kW hydrogen fuel cell rather than the 85kW fuel cell used in other hydrogen vehicles. This cell is lifted from a forklift truck and generates 11bhp. With a carbon composite chassis and fibre-glass body panels the Rasa weighs 580kg and is capable of a claimed 250mpg on the official urban cycle.

The efficiency is achieved through the use of lightweight materials and advanced aerodynamics. The slippery bodywork and curved underbody create a drag co-efficiency of just 0.224cd – lower than any production car on sale today. 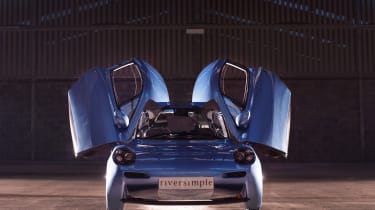 Riversimple claims that early prototype versions of the Rasa are capable of 0-60mph in 10 seconds with a top speed of 60mph.

At the end of the year, the Welsh-based brand will run a 12-month public trail with 20 prototypes on UK roads ahead of the full production vehicle arriving in 2018. Riversimple says: “It will be offered to individuals in a strategically planned, phased roll-out by region in order to support a low risk, commercially practical introduction of profitable hydrogen refueling infrastructure.” 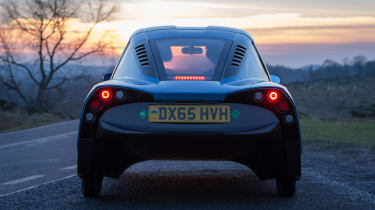 The initial batch of vehicles will use a hydrogen refueling station in a ‘yet to be announced’ location, following funding being raised to match a €2 million EU grant.

When the finished product does eventually arrive, the Riversimple Rasa will only be leased to owners or a fixed monthly fee, which will cover all costs including repairs, maintenance, insurance and fuel expenses. Riversimple clams the cost will equate to around the same amount per month as leasing an entry-level VW Golf.

What do you think of the Riversimple Rasa? Let us know in the comments section below…