Are the roads getting safer or more dangerous? Mike Rutherford wants to know - but the DfT doesn't seem to 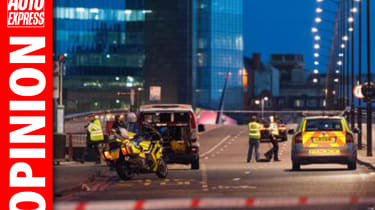 Before attempting anything in life, it's not a bad idea to be aware of the risks involved. With this in mind, how many people were killed or injured in traffic accidents on the roads, cycle lanes and pavements over the last 12 months or so?

Year on year and all things considered, are they getting safer or more dangerous? We deserve to know. And it's the job of the Government's Department for Transport to know. But it, er, doesn't. True, the DfT has a rough idea of accident stats. That's why it has just quietly published provisional estimates for reported road casualties in Britain. Yet it's very precise, when it concludes:

• What to do after an accident

Really? How can this arm of Government arrive at such exact 'conclusions' when it admits that data from several police forces has gone 'missing' - a word the DfT uses to describe casualty figures that have gone AWOL, apparently?

Another contentious issue is that pedestrians, drivers and car occupants killed or injured when a plane crashed on to a Shorearm highway last summer has led the DfT and other agencies to conveniently 'exclude any road casualties from the [Shoreham] statistics'. In other words, the innocent folk killed or wounded in cars or on foot at Shoreham on that dreadful day are not being classed as road accident victimes - thereby keeping casualty figures for road users/pedestrians artificially low. After all, road accident stats can't be seen to increase under the Conservative Government as Labour would cash in on such an unwelcome development.

Another major flaw with the DfT's data is that in its 'road user type' charts, it correctly includes cars and car occupants, motorcyclists, cyclists and pedestrians - yet it inexplicably excludes buses, coaches, taxis, lorries, vans and trams. Also absent are other accident-prone road-based machines such as construction, agricultural and road-sweeping vehicles, refuse trucks and more. And left-hand-drive HGVs deserve a category of their on on the grounds that, arguably, they're the most lethal vehicles on Britain's increasingly hazardous roads. Aren't they? I'm tempted to ask the DfT. But I suspect it doesn't know... or care.

Should the DfT know more about the casualties on Britain's roads? Let us know what you think in the comments below...