The Armstrong Phaeton hybrid predates the Toyota Prius by over a century, and is expected to fetch over £120,000 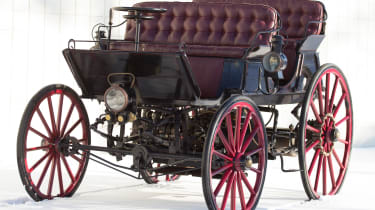 The Toyota Prius was the world’s first mass-produced hybrid vehicle, and when it was launched in 1997 it was heralded as a forward-thinking vision of the future. But the 1896 Armstrong Phaeton had a hybrid powertrain over 100 years earlier, in 1896 – and now the only example ever made will go to auction on March 10th.

The Armstrong Phaeton was well ahead of its time in a number of ways. The hybrid powertrain consisted of a petrol-powered, 6.5-litre two-cylinder engine, onboard battery and dynamo flywheel, and this gave it the ability to start itself – 16 years before Cadillac came up with the starter motor. The dynamo also powered the rest of the car’s electrics, such as lamps and ignition sparks.

Even more advanced was the use of a magnetic clutch and semi-automatic three-speed gearbox, negating the need for a clutch pedal. Interestingly, the Armstrong’s hybrid powertrain had so much torque it had a tendency to split the carriage wheels it drove on! 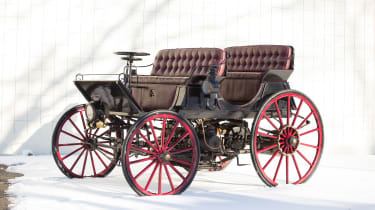 Despite technically being a prototype, the Armstrong Phaeton remained in constant use for many years. It was housed at Armstrong’s Bridgeport facility until 1963,  although it was flood-damaged at some point. A curious employee then moved it to his home garage, where it stayed for 32 years until it was discovered by a Mr Dennis David, who passed it into the McGee collection of Conneticut-made automobiles. It was then passed onto Robin Loder, a UK-based Veteran enthusiast who restored the vehicle back to full operational condition, before selling it to the current American owner.

The goal of the restoration was to enter the Armstrong Phaeton in the London to Brighton run, where if entered it would be one of the earliest American automobiles to participate.

What do you think of this futuristic vintage hybrid? Let us know in the comments...