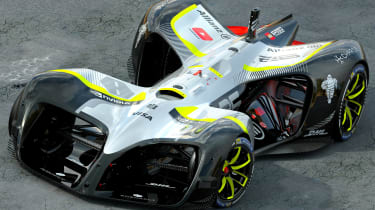 Roborace officials have unveiled the autonomous ‘robot’ car set to compete in a future series alongside Formula E, following trials of its DevBot prototype and a debut public demonstration in Buenos Aires last week.

Designed by ‘automotive futurist’ Daniel Simon - the man behind vehicles in Hollywood blockbusters Tron Legacy and Oblivion - the Robocar is powered by four motors delivering 300kW apiece, and is fuelled by a 540kW battery.

With a claimed top speed of around 200mph and a body of mainly carbon fibre, the car uses a Nvidia Drive PX2 ‘brain’ to process up to 24 trillion AI operations per second. Data is supplied by five lidars, two radars, 18 ultrasonic sensors, two optical speed sensors, six cameras and a GNSS positioning system.

Robocar also utilizes ‘360-degree situational awareness’ to work out precisely where it and its surrounding competitors are on any given track.

“This is a huge moment for Roborace as we share the Robocar with the world and take another big step in advancing driverless electric technology,’ said CEO Denis Sverdlov. “I am so proud of the entire team and our partners and particularly the work Daniel has done creating this beautiful machine.

“It was very important for us that we created an emotional connection to driverless cars and bring humans and robots closer together to define our future. The progress with Devbot on track and building the Robocar in less than a year has been extraordinary and we cannot wait to continue the journey of learning with the Robocar.” 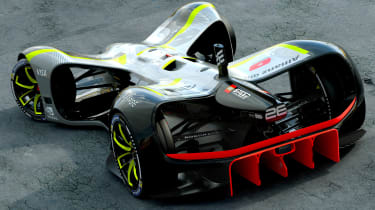 Roborace is yet to confirm the date and location of its first race, although further public outings are planned ‘during the remainder of 2017’.

Eventually organisers hope to assemble a field of 20 Robocars in a support series for Formula E, with ten teams of software engineers configuring the mechanically identical vehicles in a battle of artificial intelligence.

Two prototypes performed the first public display prior to the Buenos Aires ePrix last week, although teething problems were evident as one of the cars crashed.

What do you think of Roborace's efforts? Let us know in the comments below...