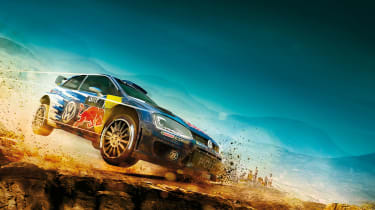 Many petrolheads dream of getting behind the wheel of their favourite cars and racing them at top speeds around the globe in front of adoring fans. Unfortunately, for most of us the dream never gets close to reality.

The closest most of us come is the controls of a video game console, with classic racing titles such as Gran Turismo, Colin McRae Rally and Forza offering gamers down the years a chance to experience the life they crave.

But the advent of next-generation games consoles is making the experience more realistic and immersive than ever. The latest game, DiRT Rally, gives fans the best insight yet into the high-paced and muddy world of rallying, allowing them to compete in World Rallycross and famous events like Pikes Peak, and drive cars from the sixties through the eighties to the latest highly tuned motors. 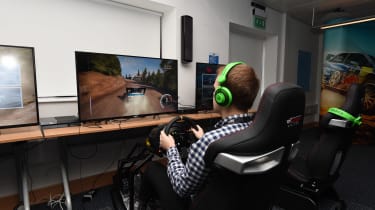 Delivering a product of this kind is not an easy business, and studios are ploughing more resources than ever into the area; after all, it outperforms even Hollywood for sales. So how do you make a game as realistic as possible, while remembering that most gamers and rally fans won’t have driven these actual machines and will be using a control pad?

Ahead of DiRT Rally’s 5 April official launch, Auto Express was invited for an in-depth tour of the Codemasters studio in Warwickshire, to get a behind-the-scenes look at just what goes into creating a game that’ll leave fans drooling.

Fans’ desire to play a game is often dictated by what virtual cars are available to drive. While it’s down to Codemasters’ licensing bosses to sign up models to showcase in any given game, designing them to perfection is the responsibility of group lead vehicle artist Nick Phillips and his team. Since he joined the studio in 1999, Nick’s seen a range of car games – such as the F1 series – pass through his department.

The process starts with image collection, with seemingly endless pictures of each model’s exterior, cabin and inner workings researched. For rally cars, this includes the liveries of, say, Colin McRae’s 1995 championship-winning Subaru Impreza 555. Sometimes the maker will pass over all the computer design info needed – but more often than not, it’s down to the team to make things work. 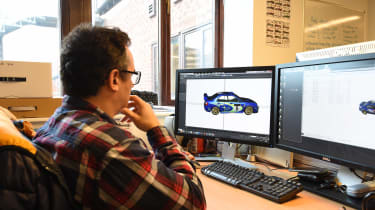 Designing just one car to Codemasters’ exacting standards can take 45 days, and some of this is outsourced to the studio’s office in Kuala Lumpur, Malaysia. Nick admits there’s great rivalry between studios to produce the very best for gamers, and rivals are slowly catching up with Codemasters’ fine level of detail when it comes to depicting damage.

“We take great pride in getting things as accurate as possible,” he says. “We all review each other’s work, and nobody minds being told they might have missed something. We’re all car fans, so what we do is the best job in the world without being a racing driver.”

Not only does the car have to look a million dollars, it has to handle like its real-life counterpart, too. One of the hardest things to do is replicate the feedback you’d experience if you were actually driving it, and then transfer this through a controller into the hands of the gamer.

Senior gameplay designer Nick Rathbone’s job is to do exactly that, using a range of 400 different parameters to affect how the car feels, handles and gets damaged. Suspension set-ups and engine specs come direct from the manufacturers, and are then tailored to interact with specific surfaces – whether gravel, tarmac or snow. Nick can play around with tyre pressures, springs and valve settings to create the ultimate machine, while a car’s internal workings are mapped, too. Smash an area where the turbo’s located, and you’ll be running with reduced power from then on. 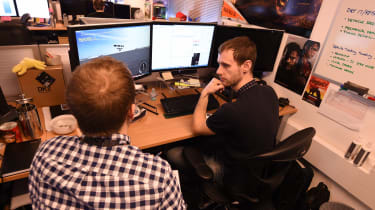 The experienced gaming community and pro rally drivers are able to give feedback as to how accurate these cars are. However, many gamers haven’t driven a rally machine at top speed through a forest, so it’s about managing expectations of what this feels like.

Nick and his team are aware it’s not a total simulation, but they’re getting closer than ever in their pursuit of realism. He says: “We want to ensure it feels like the actual car. We can’t simulate something exactly – we’d need NASA computers – but we can create an authentic reaction and make it playable on a controller. Ultimately, you’ve got to have fun.”

Track layouts go hand-in-hand with the ‘game world’ you’re playing in, and the two departments work closely together. Game bosses will tell the team what tracks to feature, and the level designers will make site visits to perfect things.

Eight-point photographs are taken every 20 yards, while buildings and crowd locations are mapped, too. Designers look at ditch depth and type of surface – is it loose or thick gravel? To get the best gameplay possible, the track is built in sections, with each one taking up to two months to design. Matt Battison, lead level designer, says his favourite in DiRT Rally is Finland: “It’s quite scary, and we tried to push it for this track. We wanted a real sense of fear.” 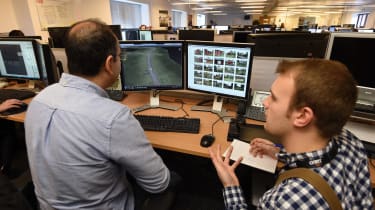 Once the track’s designed it’s sent off to the art team, while Matt’s staff will focus on placing replay cameras and working out AI (Artificial Intelligence) racing lines. The art desk is where the game really comes to life, with lead environment artist Khush Kalsi overseeing the process. His team is responsible for everything seen in the game – the foliage, trees, buildings, kit and road markings. Rally games bring the extra challenges of much more trackside ‘furniture’ when compared with a circuit. Add in weather and a range of surfaces, and it’s certainly not a walk in the park.

Khush explains that in order to balance performance on consoles with sheer beauty, the track is designed in 32-metre sections, which are repeated in variations throughout. To the player – and even a hardened veteran gamer – it’ll be near-impossible to spot this. Khush says that’s what his job is all about: “We have to make it believable.”

No two cars look or drive the same – and they sound completely different, too. To create the realistic noise of a rally car roaring through the forest, what better way than to record the vehicles? Codemasters teams up with an owner in Yorkshire, who has a garage full of useful models.

These are recorded accelerating up to the red line and at idle, plus over as many surfaces as possible. Stuart Ross, lead audio, explains the trick is to give the player cues and feedback about grip levels through the sounds – slight tyre squeal before a spin can give a gamer a split-second to react before he smashes into a tree. 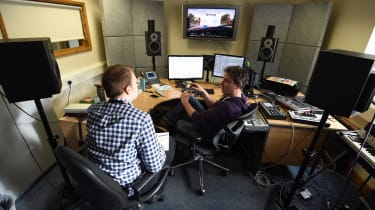 Stuart says: “We want to make the player feel like they’re punishing the car – you can hear the suspension and gearbox crunching. We’ve got wind noise when you break a window. It’s one of the best games I’ve worked on.”

One of the biggest changes for this game, and one of Stuart’s favourite parts, is how the car interacts with the space it’s in. Simply put, a vehicle sounds different in the forest than on an open lane. He adds: “I really wanted to imitate a car approaching. Watching YouTube rallying videos, I could feel the anticipation through the trees as the car’s coming. It was one of the things we had to get right.”

The pace notes the player hears were delivered by none other than chief game designer Paul Coleman, who drew upon his experience as a part-time co-driver. He was strapped into the £15,000 D4 simulator, so his voice would seem to be coming from inside the car rather than being delivered in a sound studio with little emotion. Five different speeds were recorded, to match to how fast the player is travelling. 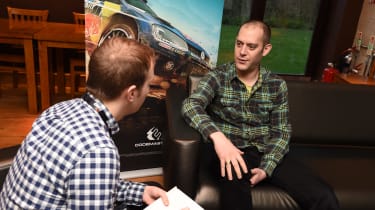 “It’s a beautiful, challenging sport. Going through the forest at 100mph is very different to the experience we had been representing [in previous games], so we built this from the ground up, to try to understand what we’d not been getting right.”

What was the biggest challenge?

“Gravel poses a real problem; no other game has to deal with the relationship in a racing sense. Loose gravel is different – it’s more like a fluid – so we took a lot of time rebuilding our model of surfaces.”

How did you achieve realism?

“The driver of the car I co-drove was involved, and we allowed him to prototype stuff with daily iterations. This is much closer to real-world automotive engineers and the relationship they have with testers to tweak settings – and it was the first time we’ve had that.”

Are you happy with the final game?

“This is much closer to my perfect vision. It represents the sport I love, and is the closest of anything we’ve done before – closer to what rallying is. You always feel like you can go quicker, and as a player you feel the mistakes you’ve made are your own and not the game being unfair. I’m delighted with how it’s turned out.”

What's your favourite driving game? Let us know in the comments below...