'Formula One is fast becoming a farce which is best ignored'

Steve Fowler's love affair with F1 is almost over, as he resorts to wishful thinking in order to keep the flame alive 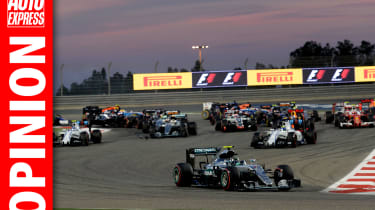 How I’ve loved Formula One over the years. I worshipped Nigel Mansell as a lad (so what a joy to have him teach our man Rich a thing or two), I’ve stood on muddy banks watching the daring do’s of more modern day heroes, I’ve bought and worn the teamwear, subscribed to watch live on TV and had the privilege of meeting some of the drivers, including the legendary and charming Michael Schumacher.

But in spite of all that, my love affair with F1 is almost over. The candle still flickers away in the hope that those who run it, whoever they are (and that’s part of the problem), realise it’s fast becoming a farce – a global laughing stock.

Let’s not even bother talking about the qualifying format that confused and bored everyone (thankfully the sport has now reverted to last year’s set-up). I tried to watch the Bahrain GP (above), but found it so numbingly dull commentators David Croft and Martin Brundle deserved best supporting actor Oscars for feigning excitement through the race. 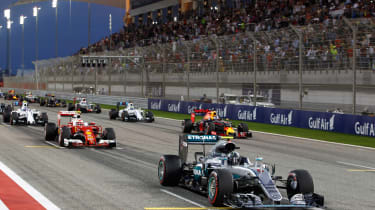 The only ‘overtaking’ I saw was aided by fresher tyres or the Drag Reduction System – and that’s not racing in my book. Far from it.

It’s not that we’re without choice. The last F1race coincided with MotoGP and BTCC – both provided more thrills per lap than F1 in a whole race. Formula One is supposed to be the pinnacle of motorsport – yet it hasn’t acted like it for years. It comes across as amateurish and unprofessional, and takes us F1 fans across the world for granted.

This weekend the F1 circus heads to China, a place many of the car makers putting so much cash into the sport are banking on for their financial futures. It’s F1’s most important shop window, so it has to put on a good show there, doesn’t it? You’d hope so, but…

What do you think is the future of Formula One? Leave us a comment below!