Could whisky be the car fuel of the future? 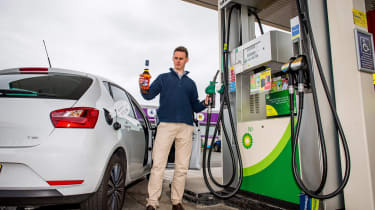 History has a knack for repeating itself. Go back a few centuries, and it was French philosopher Voltaire who said Scotland is where ‘we look to for all our ideas of civilisation’. And anyone visiting Scotland today could say much the same - not only was it the first country in the UK to lower its blood-alcohol content to cut down on drink driving, but it’s also pursuing new means of hitting ambitious EU targets to reduce emissions by 80 per cent by 2050. And part of this could involve using whisky - the country’s most famous export - to fuel cars in the future.

Celtic Renewables is a biotechnical company based in Edinburgh, and they are spearheading the effort of turning waste from whisky distilleries into biobutanol - a viable alternative to petrol and diesel that doesn’t require engine modifications. If all goes well, biobutanol could replace a million litres of conventional fuel over the next few years, offsetting thousands of tonnes of CO2. Auto Express headed over to the company’s HQ to meet founder and president Martin Tangney to find out more about the venture.

‘When Henry Ford mass produced the Model T, he designed it to run on bioethanol. Ford was a biofuel man,’ Professor Tangney explains. Ford envisaged a future in which land was farmed to grow crops that would both feed people and produce ethanol, which in turn could be used to power the machines that farmed the land. ‘He had the idea of creating circular economy, something everyone talks about these days,’ adds Tangney. 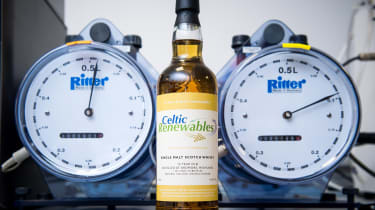 The process of making whisky remains simple, though. ‘Pure malt whisky is made out of three ingredients: barley, water and yeast. The barley seeds are first left to germinate to release sugars. The distillery then adds hot water to extract the sugars, especially the glucose. It finally adds yeast which converts glucose into ethanol,’ Tangney explains.

At this point, the distilleries are left with a beer-like product; and to turn it into whisky, it is distilled in a copper still and left to age. However, only 10 per cent of the output from distilleries is whisky. The remaining 90 per cent is waste, such as the copper-contaminated beer called pot ale and barley that has been starved of sugars known as draff. 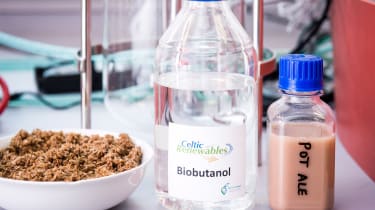 ‘This happens 24/7 all over the country. In Scotland, over two billion litres of pot ale is produced each year, along with three-quarters-of-a-million tonnes of draff,’ Tangney says. Currently, much of this waste is dumped into the sea, where strong currents carry it elsewhere, or is used as a thinner for cattle feed, but there’s plenty more that pot ale and draff can be used for – and particularly for motorists.

Celtic Renewables uses the century-old Weizmann ABE fermentation process with a modern twist and some clever patents to create biobutanol. The draff and pot ale are treated with heat and acid and fermented to create a broth. During fermentation, bacteria convert the broth into butanol, acetone and ethanol. Although ethanol has been a certified biofuel for years, it was only in 2009, after years and millions of miles of testing, that the UK Renewable Transport Fuel Obligation recognised butanol as a biofuel. 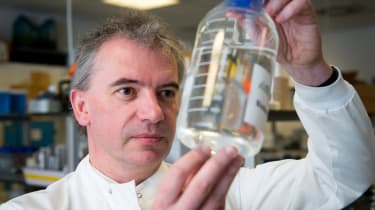 Helpfully, biobutanol’s energy content is closer to that of petrol compared with bioethanol, meaning a car can run on it without needing a different engine. With a better energy content than ethanol, there’s little compromise in fuel economy and performance, plus it can also be used in higher-blend concentrations without harming the engine. A 16 per cent blend of biobutanol in your tank offers motorists the same fuel economy as a 10 per cent blend of bioethanol, but with double the energy from renewable sources and twice the greenhouse gas benefits.

For every litre of petrol substituted with biobutanol, there is a CO2 reduction of 2.322kg. ‘And that’s just the direct effect. If you look at the indirect effect, we’re taking hundreds of tonnes of whisky residue that would end up elsewhere and converting it in a sustainable manner,’ Tangney says.

Celtic Renewables isn’t looking at taking the oil industry head-on, however: ‘It makes no sense to go out there and compete with the likes of BP or Shell,’ Tangney tells us. ‘The most sensible thing to do is bring biobutanol in as a blend, so at whatever percentage it is, you’ve displaced the same amount of petrol. 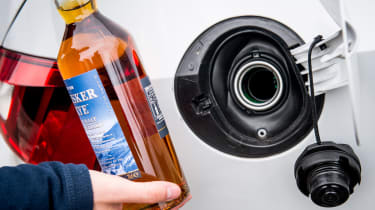 By choosing to mix biobutanol into existing fuels, there’s no need to invest in a new infrastructure and it’d be available from every fuel station. Prof Tangney adds: ‘You want the least destruction into day-to-day lives, with the maximum impact on the transportation needs of the individual.’

Celtic Renewables was set up in 2012 with just four people on board. Now there are eight members of staff, and new employees like process engineer Lauren Beck hit the ground running. She was key behind the first extraction of biobutanol, and is now scaling up the process.

She said: ‘Scientists often work on a smaller scale. My job is to help commercialise the production on a larger scale. I’m working with industrial partners to establish scale-up processes and developing the design package.’ 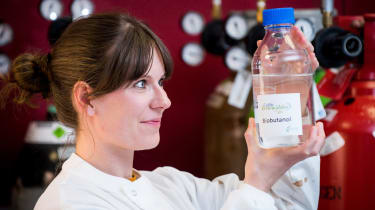 Last year, the Department for Transport awarded the company an £11 million grant, which Tangney says will be used towards a new plant in Grangemouth, near Falkirk – an area that’s synonymous with the oil industry – but thanks to its close proximity to a number of distilleries and chemical companies, could soon be known for its bio credentials. By 2018, Tangney hopes to have the plant up and running, and the first target is production of a million litres of biobutanol. More will undoubtedly follow.

On a global scale, Celtic Renewables is starting to make an impression. There’s interest from countries like Japan, and any country with distilleries is able to convert its waste for future fuel. ‘It can be disconcerting when people say we need a substitute for oil. Why can’t we have a combination of sources, like wind power, solar power, and biobutanol from whisky distilleries?’ Tangney ponders.

The world is never short of scientists looking at new ways of powering our cars, with some projects more ambitious than others. Here we take a look at a few other innovative projects under way to fuel cars of the future...

A team of scientists at the University of Nevada has been able to extract oil from discarded coffee grounds, which could be turned into a biodiesel.

One of the first diesel engines ran on peanut oil, and ever since then, vegetable oil has been considered a viable option. Motorists have driven across countries on veggie oil to prove their point.

German scientist Dr. Christian Koch created a prototype plant that turns garbage and waste - anything with hydrocarbons - into biodiesel. There are plants in Mexico and Canada converting waste to biodiesel.