The Brabus Ultimate 125 has been created from the canvas of a Smart ForTwo, and the price tag is astronomical 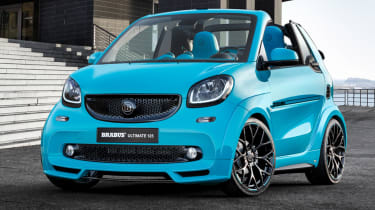 Personalisation comes at a premium: that is the only conclusion that can be drawn from the arrival of the Brabus ForTwo Ultimate 125, the tuning company’s latest reinvention of Smart’s microscopic ForTwo city car.

Using the existing 898cc engine, Brabus has improved the induction system to push power up from 89bhp to 123bhp, while shorter ratios on the standard six-speed dual-clutch gearbox shave three tenths off the normal 0-62mph time that’s now down to 9.2 seconds. The top speed climbs as well, rising from 103mph to 109mph. 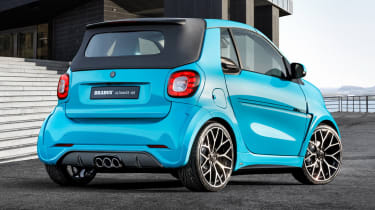 And how much does this additional performance cost? Approximately £43,000, give or take a few quid depending on the exchange rate. The convertible version meanwhile is priced in the region of £45,500.

While these figures are quite staggering for a city car - the cabriolet costs just a fraction less than a Caterham Seven 620S - Brabus has more than just marginal performance gains up its sleeve.

• The best city cars you can buy

Only 125 units will be made - ensuring exclusivity - and the Ultimate 125 comes with a range of styling options, so buyers can customise their new car to their hearts’ content. 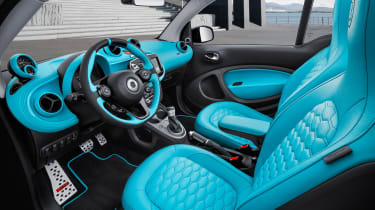 Customers will have free reign over the colour scheme, with a huge palette applying to the exterior bodywork, the soft-top roof (if selected) and the interior, too.

There’s also of the option of the ‘Widestar’ body kit which crams 18-inch wheels under the arches, and a lowered suspension which allows the Ultimate 125 to cling onto the tarmac.

Other features include a slightly wider track, and a triple-exit exhaust in place of the dual-tailpipe on the standard Fortwo. Is that enough to justify the price tag? You be the judge…

What’s your verdict? Would you buy an Ultimate 125 if you had the money? Tell us what you think in the comments section underneath...