Caterham Seven 620 gets road-biased S Pack extras – but has it made this driving icon more usable? 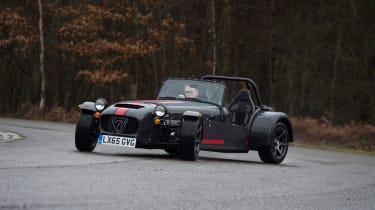 The Caterham Seven 620S is more approachable than the hardcore 620R, but with the same wild engine it still feels a handful in tricky conditions. For Caterham purists wanting the perfect balance between track day dominance and a fast road car, this could be the ultimate machine. But it doesn’t come cheap compared to the rest of the already capable and rapid range.

Caterham has shaken things up in the Seven range, giving customers a choice of two flavours - cars fitted with the street-biased S Pack or a track-oriented R Pack. Until now, the 620 range-topper has only been available in racier R trim, but now the brand has launched this, the Seven 620S. The question is, does the softer version of the firms most hardcore Seven add any extra appeal?

It’s £5,000 cheaper than the R, costing £44,995. But that’s still an incredible price to pay for something that will likely only get taken out on high days and holidays. 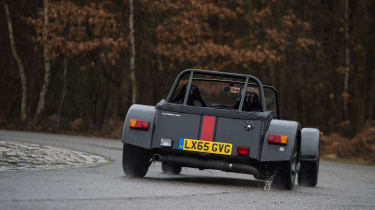 However, it promises to be more usable day-to-day thanks to a softer Sport – rather than Race – suspension package, a five-speed manual gearbox with taller gearing for better cruising, full weather protection (including a heater) and less extreme tyres all fitted as standard.

Don’t think this is a soft Seven, though – the rabid 2.0-litre supercharged four-cylinder engine counters that. It kicks out an almighty 310bhp, which in a car weighing little more than half a tonne has a massive effect.

On a dry surface, with warm tyres, Caterham claims the 620S can rocket off the line and on to 60mph in 3.4 seconds. However, try and use full throttle in typically wintery conditions like we’re experiencing at the moment and you’d better be on top of your game. 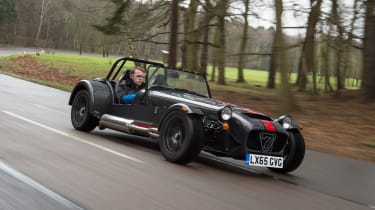 Push the throttle to the stop in second gear and your body instinctively tenses up in anticipation of the wheelspin as the 297Nm hit of supercharged torque fizzes the rear tyres.

The limited-slip differential means it will slide sideways, but quick steering ensures it’s easy to control. However, the overwhelming surge of power sees the same happen in third gear (and sometimes even in fourth) if there are drops of moisture on the tarmac.

But when the rubber eventually finds grip, the Seven romps towards the horizon with a manic rush, accompanied by an angry blare from the exhaust. It’s savage, addictive and slightly scary, but the short-throw gear change means you can snick through the ratios at incredible speed, while the non-power assisted steering relays incredible detail into your palms, allowing you to sense where you can push and where you can’t. The basic design might be nearly 60 years old, but the way you become hardwired into the Seven’s reactions is almost unrivalled. 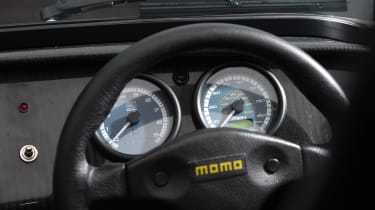 Even with the more forgiving Sport suspension, the 620S is still an extremely firm ride. The double wishbone front setup absorbs bumps well, but the less sophisticated rear axle crashes and clatters over harsh tarmac, sometimes making it hard to put the power down.

This drawback reduces the 620S’s usability slightly, but will standard leather seats, full weather protection including a heated windscreen and a heater, it’s not all bad. Our car had the SV wide body chassis (a £2,500 extra) improving space and seat comfort even further.

However, in addition to all this, our test model was fitted with the optional heated and padded carbon fibre seats, costing a pricey £1,000. While the extra warmth from the seat heaters is welcome in cold conditions with the roof off, the padding doesn’t offer much cushion. However, you can’t argue with how the fixed bucket seats and four-point harnesses hold you in place through the bends. 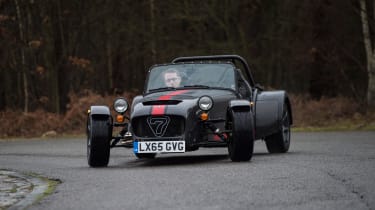 Unlike other Caterhams, you can’t build the 620 yourself. It’s hard to knock the finish from the factory though, as the toggle switches and carbon fibre dash reinforce the race car vibe – and the pared-back equipment spec.

The 620S is definitely more usable than the R, but that’s mainly thanks to the windscreen, full hood and doors, not the chassis setup. On the right road in the right conditions nothing quite matches it, but if the road surface is less than perfect, the ballistic engine feels a little too much.