The Seven SuperSprint was built as part of Caterham's 60th birthday celebrations, but does it do the brand justice? 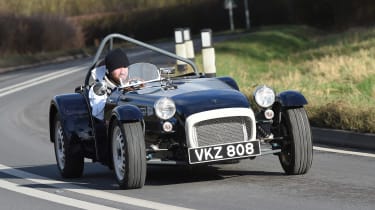 The Caterham Seven SuperSprint is as close to 1960s racing as you can get in a new car purchase. For some the elegant and charming styling inside and out will be enough to justify the high price tag, but even for those with little in the way of nostalgia for that era can enjoy the lively chassis and entertaining driving experience.

To mark its 60th birthday last year, Caterham launched a car called the Seven Sprint - a version of the brand’s iconic sports car with some extra trim features to give it a real sixties look. Now there’s this version designed with a racing theme: the SuperSprint.

It’s still a road-legal car, though, and while our model came with just one seat, you can also get a normal two-seater. You do get a special Brooklands style aero screen, quilted and stitched seats trimmed in tan Scottish leather and a wooden steering wheel.

Then there’s the livery: there are six options available, each with a different racetrack as its theme. Our car is Dijon blue with a white noseband, but you can also get Aintree green, Hockenheim silver, Iola red, Watkins Glen white and Zandvoort green. 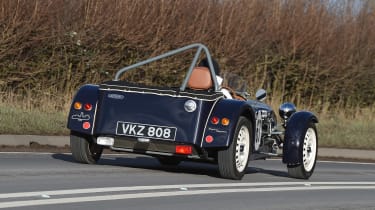 The racing livery looks great and the classic Seven design means the SuperSprint really does look like a classic car. We had more than one person ask us how old the car was when we are driving it and they were shocked to hear it was in fact brand new.

The SuperSprint uses a tuned-up version of the Sprint’s 660cc three-cylinder engine – but it’s been tuned up, and has 95bhp in this car. It’s quite a long way from a sixties engine: it’s from a Suzuki and is turbocharged, so low-down performance is surprising. Caterham has managed to make it sound surprisingly old-school, though, with an entertaining exhaust note.

At low speed it’s properly quick thanks to that turbocharger and super-short gearing for the five-speed manual gearbox. It’s so short that you have to change gear constantly to avoid hitting the limiter. It’s great fun, though, as the shift is short and precise.

The Caterham is so light that performance is brisk even with less than 100bhp, but those used to more modern Sevens might find the powertrain a little lacking. The engine isn’t as responsive as the naturally-aspirated units found in the company’s other models - or in the original Lotus Seven that the SuperSprint draws so heavily on. 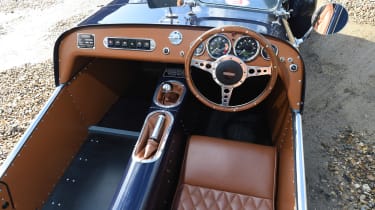 A heel-and-toe downshift, always tempting thanks to the tiny pedal box, requires a little more patience with the throttle than you would expect in a Seven. It’s the only real reminder that this is a new car, though, as the unassisted steering is bristling with feel, and the exposed front wheels let you place it perfectly on the road.

With no roof and only the tiny aero screen, it’s not a car that’s at its best on a winter motorway - you’ll have to defrost your face after even a short trip. But once you’re on a great road all of that melts away, and you can really enjoy the SuperSprint for what it is: one of the most characterful new cars you can buy.