Caterham's Seven Sprint is great fun and has charm by the bucketload, but you can't have one...

As charming as the Seven Sprint is, you can’t have one, because all 60 examples have been sold. Almost £28,000 may be a lot to ask for the dinky Caterham, but the Sprint is dripping with character and charm that is elsewhere hard to come by. Fun to drive and great to look at, the Sprint is a fitting tribute to the 60-year-old roadster.

A lot has changed in the last 60 years, but with the exception of a new name, the Caterham Seven really hasn’t. It has remained an open-top, rear-wheel drive, two-seat roadster for more than half a century, and to mark its 60th birthday, Caterham has launched this: the Seven Sprint.

Originally planned for launch in the mid-1960s, the Sprint never made it past the drawing board. But Caterham has dusted off the plans and brought 60 limited edition versions to the market – at £27,995 a pop.

That’s a huge price to pay for a Caterham – especially one with a 660cc, 80bhp three-cylinder engine – but it hasn’t deterred buyers, as all 60 examples were snapped up within a week of the car being officially announced.

That money buys you a Caterham that looks like no other; flared front wings, a polished exhaust and individual rear lights combine with period touches such as the cream wheels, polished hubcaps and a British Racing Green paint, to create something truly unique. 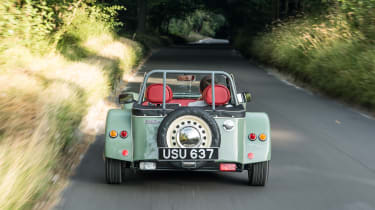 Folding yourself over the sill, under the roof and into the driver’s seat would be easier as a contortionist, but once you’re there you won’t want to get out. The cabin in beautifully simplistic and bursting with vivid red leather, while the wooden steering wheel and short-throw, chrome gear knob are delightful retro additions.

Under the bonnet you’ll find the same turbocharged engine and five-speed manual gearbox as fitted to the existing Caterham 160. With just 80bhp and only 107Nm, the numbers aren’t exactly exciting, but weighing just 490kg makes it fairly lively – taking 6.9 seconds to sprint from 0-62mph.

The engine only really starts to pull above 3,000rpm, but it’s happy to hang on until 7,000rpm as long as you don’t mind the rather loud and boomy exhaust note. The gearing is incredibly short, so you find yourself rifling through gears at a frantic rate – but the tight and weighty throw make it no hardship.

Weighing as little as it does means the Sprint rides with compliancy at lower speeds, but hit a pothole on a dual carriageway and it’ll feel and like you’ve hit a landmine. Motorways make superminis feel like giants next to the pint-sized proportions of the Sprint, too. 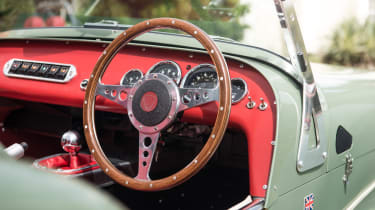 On tight and twister B-roads is where the Caterham comes alive. The steering is brimming with feedback and reacts instantly to every input. Skinny tyres serve up decent bite but even when the limits of grip are breached, everything remains controllable and user-friendly.

It’s a joy to drive, and there’s little else on the road that can offer the same back to basics driving experience as a Caterham. You’ll be having so much fun, in fact, that you’ll forget about the long and painful process of getting out once reach your destination.