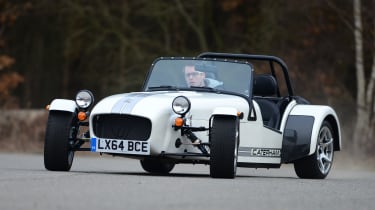 It might not be the safest car around, but the new Caterham Seven 270S is as pure as sports cars get. You can forget practicality, too, but if you’re looking for something that’s great to drive on the road, this new 270S version of the classic Seven design delivers rapid pace and agile handling at a decent price.

Way back in the 1950s Lotus created the Seven sports car. Around 15 years later it sold the design to Caterham and today the company is still going strong building the classic British sports car. Stronger than ever, in fact, because for 2015 Caterham has revamped the Seven line-up to fall in line with the current range bookends – the entry-level Seven 160 and the blisteringly quick top-spec Seven 620.

This is the 270, the next step up from the 160, and we’ve tested it with Caterham’s street-biased S pack. Although it’s slightly more usable on the road, the focus is still solely on the driving – and the 270 really delivers here. 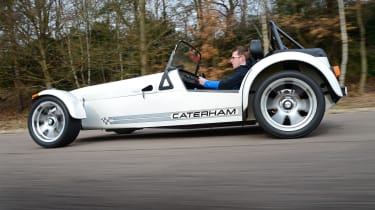 It gets a 1.6-litre four-cylinder non-turbo engine from Ford that produces 135bhp. That might not sound like a lot, but in this featherweight 540kg Seven it gives superb performance.

There’s no traction control, so you have to be careful off the line, but get the start right and it’ll rocket from 0-60mph in 5.0 seconds, while the blocky aerodynamics and short gearing mean top speed stands at 122mph.

Lots of torque on tap relative to the Caterham’s lowly weight means you don’t have to always rev the engine out to experience the Seven’s speed, either. It’ll shoot forward if you stab the accelerator, with the big, stainless steel exhaust silencer giving a bassy exhaust note. But if you do charge towards the redline the noise crescendos to a lovely, racy rasp. 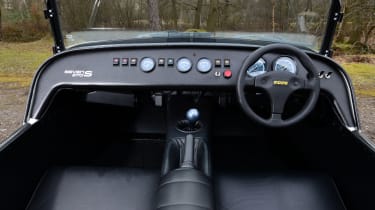 Our car was fitted with the £1,495 optional six-speed gearbox (a five-speed unit is standard) that was delightfully precise – just like the steering – and the short throw allows fast, snicky gear changes to keep the engine on the boil.

On the subject of steering, the Seven does without power assistance, which means there’s a delicious amount of information relayed back to the tiny steering wheel on how much grip the front tyres have. There’s plenty there to lean on, too, and you can hustle the Caterham along at a super pace. Here the steering is much more manageable.

Manoeuvring at low speed the steering is heavy, but at least with not much to get in the way of your view, visibility is great all-round, so parking is easy. 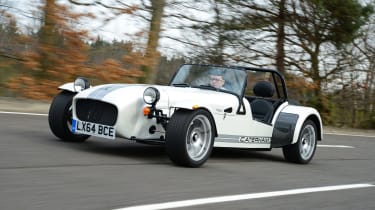 Our test car’s optional S pack added a softer suspension setup that, for a low-slung sports car, is well judged for the road. From the Caterham’s tiny cockpit you can see the front wheels bobbing up and down over bumps, but there’s no sense the front-end setup ever struggles to deal with bumps.

Unfortunately, that’s not quite the same at the back. The 270S gets a less sophisticated rear suspension design than the new, higher rungs of the Caterham ladder. Because you sit so close to the back wheels, it means driver and passenger get bumped about – in fast corners it can even bounce the Seven off-line.

But this is all part of the charm of driving a Caterham, and so is the cabin. Inside, the layout isn’t what you’d call practical, even in this widebody SV model. However, the new range gets revised dials and a new gear lever with S badging. Other luxuries include a heater and a heated windscreen, but beyond this there aren’t many toys to play with. 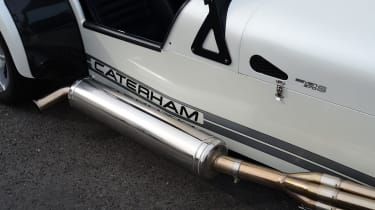 Roof down and with the side screens fitted buffeting isn’t too bad, but there’s also either a full roof or an optional half roof for extra weather protection if you need it. This is stored in the boot, which is big enough for two squashy overnight bags.

Apart from a little bit of room behind the seats, there isn’t any more storage on offer, but there is a 12V socket to charge your mobile on the move.

These few creature comforts take the hardcore edge off the 270S. But importantly they don’t take the focus off the heart of the experience: the thrill of driving a classic British sports car.

It’s not very refined and in this modern safety conscious world the Caterham’s crash performance won’t be very good. But for a base price of £22,995 (or £19,995 if you want to build it yourself) nothing offers a race car like driving experience that’s this pure.