We drive the new entry-level, three-cylinder Caterham 7 160 – but does it have enough power to impress? 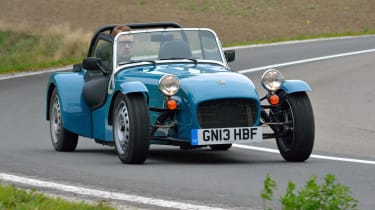 As modern cars continue to isolate the driver from the driving experience, the Caterham Seven 160's beauty is in its simplicity. Every control is supremely communicative, and helps you maximise your enjoyment of the car's agility. The tiny engine needs to be worked hard, but that just adds another level of driving engagement that very few cars can match at any price.

The Caterham 7 160 is, in theory, an odd hybrid between a classic 7 and Suzuki Jimny. Caterham has taken the Japanese market SUV's tiny three-cylinder 660cc engine, adds a new sump and ECU to bump power from 64bhp to 80bhp, and slots it into a 7 chassis. The Jimny also donates its five-speed gearbox, live rear axle and rear drum brakes.

Although 80bhp doesn't sound like much, the 160 only weighs 490kg, giving a power to weight ratio of 163bhp per tonne. The clutch pedal is light and the stubby gearstick snicks around its gate with ease. The steering is totally unassisted, but it's not heavy, and the rack is fast, giving very quick, faithful response from the tiny wheel that gets heavier as you build speed.

Once the turbo kicks in, the 160 pulls surprisingly hard. Although small, the engine does its best work between 3,400rpm, when the maximum 107Nm of torque is delivered, and around 6,000rpm. Here, it thrums away pleasantly on in third and fourth gears, with the turbo giving a characterful chirp as you back off. Above this, you do get more power, but the racket the engine makes takes the edge off the fun.

Like the GT 86, the Caterham uses skinny tyres - in this case 155mm-wide Avons wrapped around tiny 14-inch steel rims. These aren't the grippiest, but that means it's great fun on a twisty road, even at modest speeds. In the dry, 80bhp is never enough to cause a loss of traction unless you're really trying to provoke a slide. The most you get is a gentle squeal of protest as the weight transfers to the outer tyres when cornering.

The brakes don't have servo assistance so require a firm push of the pedal to shed speed. However, you get loads of feel through the pedal, so you always know exactly how close to locking a front disc you are.

It's nowhere near as hardcore as Caterham's more powerful models, which is why there’s a real suppleness to the damping. Helped by the relatively high profile tyres, the 160's suspension absorbs all kinds of bumps with amazing ease for such a light car, which allows a little more body roll in the bends, but means longer drives aren't off the menu. You’re also also treated to a great view of the front wheels bouncing up and down over each undulation.

The 160 would be out of its depth on a track, but for a car to take out for a Sunday B-road blast, it's among the very best. It's engaging and challenging to drive when the mood takes you, but soft and supple when you're cruising.

You can still build one in your garage, for £14,995, or pick one up ready to roll for an extra £3,000. That price is helped by the fact that the engine is cheap - Ford's Ecoboost was evaluated but costs twice as much to buy in. But the Suzuki Jimny's unit is still a fine choice, and proof that odd combinations can work.

For an in-depth buyer's guide on the Caterham 7 from Classic and Performance Car click here...