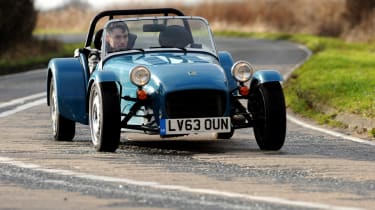 If you want a cheap, accessible sports car that will always raise a smile, the Caterham 160 is it. You’ll be amazed by how something so unlike anything else on the road can quickly become so easy to drive – but everything is so perfectly weighted. Just be careful with the options and don’t expect to tackle 100-mile motorway journeys in comfort.

Unassisted steering, rear drum brakes and only 80bhp. It sounds like the recipe for a car that’s 50 years old, but even though this Caterham Seven 160 can trace its origins back to the 1957 Lotus Seven, it’s brand new, and we’ve driven it in the UK for the first time.

The 160 is Caterham’s cheapest fully built car, setting you back only £17,995 (£14,995 if you want to build it yourself). It’s an unusual mix of parts, with a gearbox and three-cylinder 660cc engine from the Japanese-market Suzuki Jimny and a turbocharger to boost power.

It’s nowhere near as odd as it sounds, though. In fact, this tiny engine feels easily up to the job. At 490kg, the 160 weighs barely anything, so its 80bhp engine provides more than enough power for most situations. It pulls well from relatively low down in the rev range, and can achieve a thoroughly respectable 0-60mph time of 6.5 seconds.

The only problem is that you quickly run out of power as you build the revs higher. What’s more, the engine’s already spinning at about 5,000rpm on the motorway and it tops out at 100mph. If you’re going to use your 160 on the track, make sure it’s one with a short straight.

When we drove it in Italy, the dry roads provided heaps of grip, leading us to believe you could be as aggressive as you liked with the throttle and not worry about reaching the limits of traction.

But on cold, wet roads the 160 comes alive. The ultra-quick steering and skinny tyres lead to plenty of subtle oversteer moments if you’re too hard on the accelerator coming out of bends. Thanks to the basic rear axle suspension, it’s clearly not the sharpest-handling car in the world, but it feels like a perfect place to learn the art of driving before stepping in to one of Caterham’s more extreme Sevens. T

he unassisted brakes need a hard push, but they’re natural-feeling and progressive, while the tightly spaced gearbox makes quick and accurate shifts a breeze.

The lack of storage space and the ultra-narrow cabin means no Caterham is really suitable as a car for everyday use, but the 160 is at least really comfortable. The suspension feels softer than any other Seven we’ve driven – helped no doubt by the tyres’ squashy sidewalls – so you won’t be wincing over rough roads.

As a toy for those who love driving purity, the Seven 160 is great. It’s just so easy to use, so rewarding and so flattering for drivers of all skill levels.

That temptingly low price tag only makes it more appealing – but just bear in mind you’ll need to splash out £1,150 to have your car painted and £1,250 if you want the awkward roof and doors fitted to our car, as well as the heater and heated windscreen.