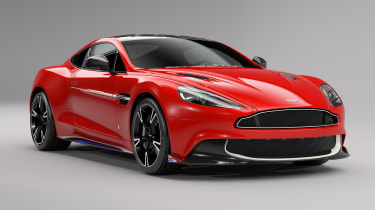 Unsurprisingly, it’s called the Vanquish S Red Arrows Edition, and it packs in unique design features in reference to the RAF’s world famous aerobatic unit. Much of the bodywork is finished in a bold, flat red colour called ‘Eclat’ red – named after the Red Arrows’ motto and being the same tone of red used on the team’s famous livery.

White and blue streaks break up the all-red paintjob, while there’s also a white ‘smoke trail’ feature on the side strake. The roof is finished in naked carbon-fibre, but features a white ‘charge’ pattern, similar to on a jet canopy. Final exterior tweaks are the two Union flag enamel wing badges, and a titanium sports exhaust system sits around the back. 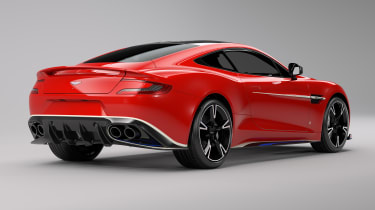 The Red Arrows Edition continues the aeronautical theme in the cabin, with more Red Arrows and RAF inspired touches. The Pinewood green trim inserts and green seatbelts evoke the fabric colour of old flight suits, and the Red Arrows logo is embroidered on the seat backs and transmission tunnel. Elsewhere, some of the switchgear in this Vanquish has been modified to suit the fighter jet feel.

Ten will be built in total, though only nine will go on sale – the final car will be given away in a raffle, all proceeds of which will go to the RAF Benevolent Fund.

What do you make of this latest piece of work from Aston Martin Q? Let us know in the comments section below...