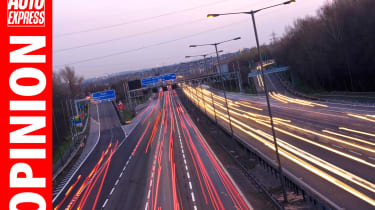 There’s now an unwritten rule among the main national political parties to ban certain words. Car occupants, workers, traffic jams, manufacturers and the costs of commuting by car are just some of them.

I know this because I’ve been ploughing through their manifestos in which public transport users and cyclists often get sympathetic mentions – and lucrative promised subsidies – while unsubsidised car drivers and passengers don’t. It’s almost as if we don’t exist in the eyes of our would-be leaders. But like our cars, we’re here to stay. At least the Conservatives recognise this by loosely promising they’d like “almost every car to be zero emission” by 2050. I’ll be dead by then, so I can live with that pledge.

• General Election 2017: what will it mean for cars, roads and the motorist?

But the Tory proposal to ease overcrowding for a few subsidised public transport users, while refusing to even acknowledge that overcrowded lanes and car parks are a daily problem for tens of millions of unsubsidised car users, to me demonstrates that the party has finally ditched the “friend of the motorist” stance of former leader David Cameron.

Labour has almost dared to mention motorists, but can’t quite spit out the word, saying it’ll simply get “people out of cars”. That’s a kick in the teeth for car users and the proud British workers who build such vehicles – while part-funding the party via their union subscriptions.

Did the Lib Dems talk to and understand the plight of British car factory bosses, production line staff, dealers, consumers and energy suppliers before vowing to ban diesel car sales eight years from now? Er, no. Even the Greens seem comparatively moderate in their dislike for diesel.

• “All parties must clearly itemise their proposals for drivers”

Meanwhile, near-defunct UKIP at least reckons it’ll tackle important issues such as potholes when it forms the next Government – which it won’t, of course. Same goes for the Greens and Lib Dems. In Scotland, the SNP vows to “encourage people out of their cars”, but doesn’t explain how it’ll get them to switch to public transport or cycling, while the political war cries from Plaid Cymru in Wales and the Democratic Union Party in Northern Ireland are to invest in road standards.

At Westminster, it’s a two-horse race between the Tories and Labour. They have little in common, apart from their conveniently undemocratic contempt for – and failure to engage with – drivers and passengers in modest motor cars. I feel cheated and disenfranchised. How about you?