Putting the Great into Britain: exploring the car industry

The British car industry is booming, we visit the country's key car manufacturing sites to find out what went right 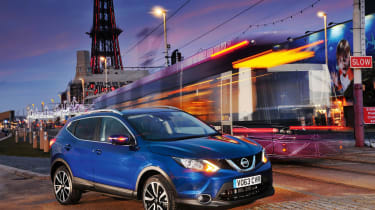 A revitalised British car industry is the shining star in the UK’s economic resurgence, and once again it’s a major player on the world scene. Last year, British automotive plants manufactured more than 1.52 million vehicles and 2.39 million engines, and they’re on target to build more than two million cars a year by 2017.

Car-crazy UK drivers bought upwards of 2.47 million new motors in 2014 alone, making the British market the most buoyant in Europe – and sales continue to grow in 2015. The momentum shows no signs of slowing up, as already this year Jaguar Land Rover, Honda, BMW, Nissan, Toyota and Chinese brand Chery have all announced major new investment in the UK.

Britain’s car industry has always been a key part of our business; indeed, in the fifties we were the biggest exporter of vehicles in the world. So it’s hard to believe that in the late seventies and eighties we were on a fast track to self-destruction. Back then we had an inefficient, strike-riddled industry run by bad managers and disillusioned workers, which was highlighted by the inept and crumbling British Leyland empire. 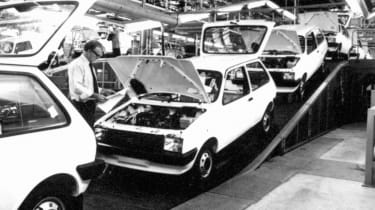 When it was formed in 1968 after a merger between the British Motor Corporation and the Leyland Motor Corporation, British Leyland was meant to become a global motoring super-power producing cars, trucks and vans. It brought together some of the most famous names in motoring including Austin, Morris, MG, Jaguar, Wolseley, Rover and Triumph, alongside commercial brands such as Leyland, AEC, Albion, Guy and Scammell.

However, it turned into a recipe for disaster, and despite being renamed as BL in 1978, the writing was on the wall. The UK’s biggest car firm was slowly dismantled over the next decade, before finally ending in 1986. BL’s demise was mirrored by a slump that affected the whole UK car industry, and in 1982 auto production hit a record low of 900,000 – and 120,000 of those were kit cars sent to Iran.

The seeds of recovery

The seeds for a very slow transformation were sown in the mid-eighties, when Japanese manufacturer Nissan laid the foundation of a new factory in Sunderland, while Toyota and Honda also started UK production in the years that followed. A major setback occurred in 2006, when the car industry here hit a new low with the collapse of MG Rover – resulting not only in the loss of 6,000 jobs, but also one of the most famous names in motoring. That’s all in the past now, though, and it’s in stark contrast with the situation today, and a booming, vibrant industry that’s now one of the powerhouses of the motoring world.

The UK has more than 30 vehicle manufacturers, in excess of 2,350 component firms supplying parts, and is home to no fewer than eight Formula One racing teams. It employs upwards of 770,000 workers and the industry generates an annual turnover in excess of £64billion, making it the largest sector for UK exports and earning £27billion a year in revenue.

It’s been an amazing comeback, and one that’s ironically indebted to a clutch of overseas companies who still believed in the UK as a great car-making nation – and in the potential of a group of famous but dying British automotive brands. Most importantly, the foreign investors from Germany, Japan, India, America and Malaysia were all willing to invest heavily to revitalise the British car industry. It was the initial belief of those Japanese car giants Nissan, Toyota and Honda that threw the lifeline to reinvent it and pull it back from the brink. 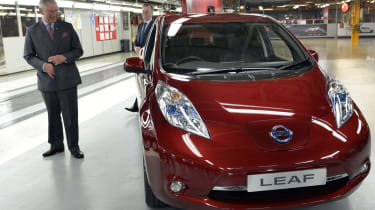 The Japanese gave UK workers the chance to prove that they were a match for anyone in the world – and it was a chance the Brits keenly grabbed with both hands. The result? A new breed of automotive worker, not only ultra-efficient, but innovative and self-motivated, too – people who have consistently proved themselves against the very best in the world, and won.

The ‘can do’ attitude of the British automotive worker was quickly noted by the rest of the global car industry, which consistently backed them with major investment. And alongside the workers has been a new generation of smart and dynamic British managers, who together are proving a formidable combination.

In recent years, British car plants have been victors in major battles against other factories located around the world to win contracts for new models that have safeguarded the future of thousands of jobs and created many, many new ones. Nissan’s Sunderland plant has gone from manufacturing a few thousand models annually in the late eighties to over 500,000 a year today – that’s more than the entire Italian car industry.

And the past decade has seen great British brands resurrected and brought back to the top of the motoring tree. MINI is once again the world’s most famous and successful small premium car, and Rolls-Royce has re-established itself as the ultimate name in motoring. They may now both be owned and bankrolled by BMW, but the cars are designed, engineered and built by workers in the UK, who’ve earned on merit every penny of the multi-million-pound investments from Germany. 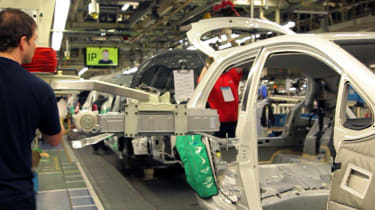 Aston Martin and Bentley have regained their position as two of the most desirable luxury car brands in the world. Bentley is also owned by a German giant, Volkswagen, but it remains a vibrant company with its heart and soul in the UK and its British workforce.

Likewise, Aston Martin’s two main shareholders may be based in Dubai and Italy, but the engineers, designers and workers who’ve delivered its revival are all based at its Gaydon headquarters in Warwickshire.

Land Rover and Jaguar faced an uncertain future when they were bought by Indian conglomerate Tata from Ford in 2008, just as the world’s economy went into meltdown. At the time, they had to lay off 2,000 workers. Today, JLR has been transformed into Britain’s biggest car company, and it’s taken on over 15,000 workers in recent years to now employ more than 30,000.

Land Rover has strengthened its place as the leading manufacturer of four-wheel-drive vehicles on the planet, thanks to Tata’s commitment and investment, but more importantly to the skills of its highly motivated workforce. Meanwhile, Jaguar is fast becoming a force to be reckoned with, on the back of world-class models such as the XF, XJ and F-Type. The XE compact executive has just gone on sale, and the sporty F-Pace SUV is waiting in the wings...

Aside from the obvious motoring giants, small niche UK sports car manufacturers such as Morgan and Lotus continue to defy the odds by simply surviving in the cut-throat world of modern motoring.

British car manufacturers still face a tough road ahead in an ever-changing and increasingly competitive industry, but we’ve earned the respect of the rest of the automotive world as a genuine player with world-class workers, engineers and designers. Over the next few months, Auto Express will be celebrating the remarkable comeback in a special series of articles that’ll tell the inspirational stories of the companies and workers who have put the Great back in the British car industry.

What do you think the future holds for British car manufacturing? Let us know in the comments section below...

More in the Best of British series...

• MINI revoloution: reinventing the most famous small car in the world• Rolls-Royce: back from the dead